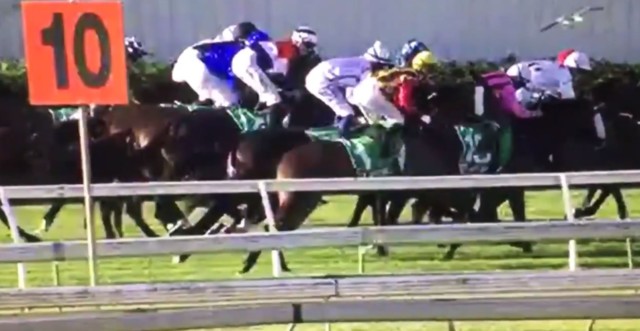 A JOCKEY who was taken to hospital after a nasty fall was the victim of a seagull apparently spooking her horse, a trainer has claimed.

What caused Simply Fly to do what she did on Saturday at Doomben ?..
A bird ??

Footage showed the horse appear to shy at something just after the start of the contest and then begin to buck, sending Thornton flying to the turf.

The rider was conscious but sent to hospital after complaining of a sore wrist, before an X-ray fortunately cleared her of any fractures.

In an attempt to explain what happened, Simply Fly’s trainer Rex Lipp replayed the race in forensice detail.

And he picked up on a seagull taking flight near the runners, which he claims spooked his horse.

Australia’s Gold Coast is known for its flocks of seagulls and even once had a rugby league side named after them.

Lipp will be hoping none of them surface again when Simply Fly runs in the Group 3 Gold Coast Guineas on Saturday.

The trainer told punters.com: “I’ve had a look at the vision from that race and he definitely sighted a seagull flying above and then when she (Thornton) tried to ride him, he got frightened.

“We don’t have seagulls up in Toowoomba (75 miles west of Brisbane), so he probably had no idea what was going on.

“Let’s hope there aren’t any seagulls flying over the track on Saturday.

“In all seriousness, this horse had a jumpout last week and a trial this week so he is fit and ready to go.”

Thornton’s partner and fellow jockey Ben Thompson rushed to her side after her fall.

And speaking of her injuries which, thankfully, she has recovered from, brave Thornton said: “This horse is quirky and I don’t often know what goes through his head.

“I do know that he did a good job of getting rid me.

“Once he jammed on the brakes I knew I was gone and I thought this is going to hurt.

“I ended up doing a couple of flips but probably straight away I was able to sit up and I didn’t think it was anything too serious.

“I pulled my (riding) glove off my hand and everything started to swell up but the swelling has gone right down now.”