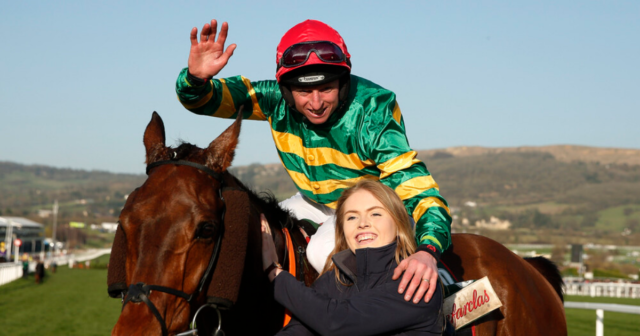 The crack amateur rider is a real shrewdy when it comes to finding a winner.

He memorably tipped Bob Olinger in last year’s Ballymore before the horse hacked by more than seven lengths.

Codd is already dropping his golden nuggets of info for punters ahead of this year’s meeting.

And those with their ears to the ground would have picked up on two fancies he likes for next month.

One is ‘revelation’ Galvin in the Gold Cup.

Codd says Galvin, who won the National Hunt Chase at last year’s Festival before victory in the Savills Chase over Christmas, can stamp his mark all over the big race.

Speaking of the best-price 9-2 second-fav behind A Plus Tard, Codd told At The Races: “What a story (this horse is).

“He had humble beginnings really, he won a few summer bumpers, went over to Perth to pick up a few hurdles but he’s just been a revelation since going chasing.

“Last season he was good but this year we thought we might’ve just been getting ahead of the pack in Down Royal.

“But obviously he went to Leopardstown and just blew them away. It was just a fantastic ride from Davy as well.

“The Gold Cup is just so wide open that you have to imagine he has as good a chance as any and he’s on the upgrade as well.”

The other to catch Codd’s eye is another Gordon Elliott horse in American Mike.

This year’s Champion Bumper is shaping up into a bit of a two-horse race between American Mike and Willie Mullins’ rocket Facile Vega.

The latter took the mickey out of rivals by thrashing them at Leopardstown over the weekend.

In case you missed it

AMERICAN MIKE made it two from two under rules, landing Listed spoils at Navan for @CoddJJ & @gelliott_racing!

That saw him installed as a best-price evens money fav for the race, with Galvin a general 3-1 shot.

But speaking before Facile Vega’s demolition job, Codd was bullish on how much American Mike wins by.

He said: “He wins by the length of the straight!

“I love him and I think from day one he came from a serious outfit, the Monbeg boys with Sean and Eamonn Doyle, and he’s done nothing but improve since he came to Gordon’s.

“We went to Tipperary early doors last October and I sat on this lad and he was just brilliant.

“He’s progressed all the way through from his bumper at Down Royal and then at Navan.

“Look, he had a canter round but he’s going to be at Cheltenham fresh and well with Gordon deciding not to run him again.

“I’m really looking forward to seeing him run at Cheltenham.”

"The Gold Cup is just so wide open that you have to imagine he has as good a chance as any"@CoddJJ joined Friday's Get In show and gave his insight on Cheltenham Festival hopefuls Galvin, American Mike and Pied Piper

Get In Best Bits: https://t.co/55ZnJQQiHp