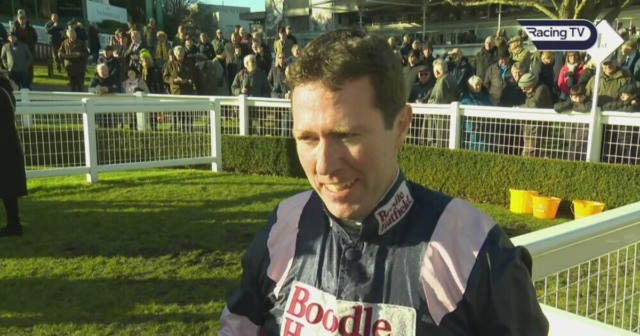 The rider suffered multiple rib fractures as a result of blunt trauma – known as a “flail chest” – which prevented him from being able to breathe on his own.

He was sedated and placed on a ventilator after the fall, and it was feared he would need to undergo surgery on the heart and lungs.

But the Injured Jockeys Fund confirmed his conditions was improving and that surgery was now unlikely.

And it is hoped he will be able to leave intensive care at Bristol Southmead Hospital later this week.

The IJF statement read: “Major Charlie O’Shea is making good progress in Bristol Southmead Hospital where he has been treated for a flail chest sustained during his fall on Sunday.

“This was a serious injury which occurs when multiple ribs are fractured on both sides of the chest disrupting the bellows mechanism which allows us to breathe in and out.

“Charlie was put on a ventilator to support his breathing directly after the injury.

“It was initially thought he may need cardiothoracic surgery to repair his chest wall injuries, but this now seems less likely, his sedation has been reduced and he has been able to come off the ventilator.

“His wife Kate has been able to spend time with him and reports he is sitting up in bed and talking.

“It is hoped he will be able to leave Intensive Care in the next few days.

“Charlie and his family are extremely grateful for the care and expertise of the hospital staff and the good wishes from the racing community.”

Another said: “Praying everything will be okay.”

While another Tweeted: “Hoping for good news in the coming days/weeks.”

The final race of Sunday’s card at Wincanton was abandoned after O’Shea, 40, received treatment on the track after he fell from Paudie in the Hunter Chase.

Prior to the fall, O’Shea has been in brilliant form in the saddle this season, partnering Rolling Dylan to win the Royal Artillery Gold Cup at Sandown and following up in the Grand Military Gold Cup.

O’Shea has spent most of his military career in 29 Commando Regiment Royal Artillery and for the last five years worked as a naval gunfire liaison officer.