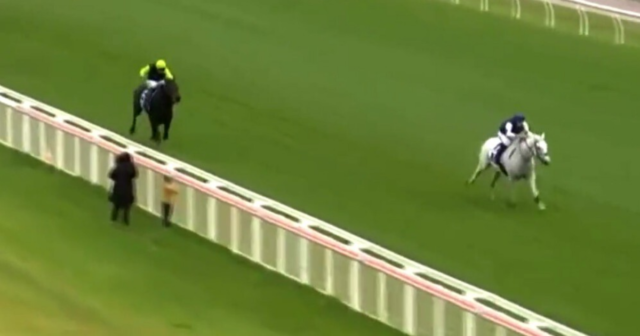 RED-FACED jockey Aaron Mitchell was inches away from ‘becoming a meme’ after he almost threw away a £30,000 race.

The Aussie rider, 25, looked to have the valuable contest in the bag aboard former Dermot Weld-trained runner Valac at Pakenham in Melbourne.

Aaron Mitchell and Valac looked home and hosed at Pakenham races
But the talented jockey began to ease down, thinking he had the race won 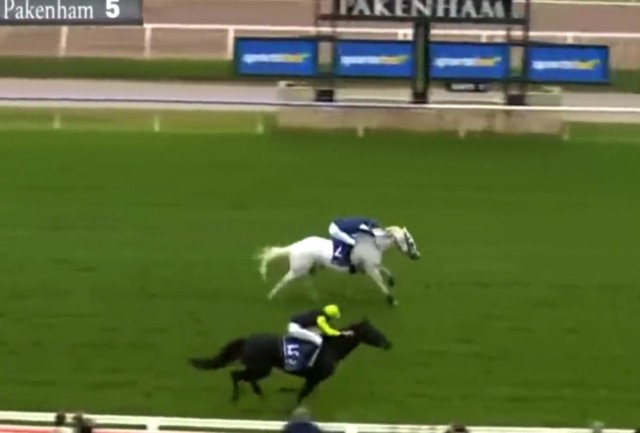 But with his horse around five lengths clear approaching the line, he began to ease down and very nearly threw the race away as runner-up Bud Fox flew home.

Realising his mistake, Mitchell desperately tried to get his horse going again in the final strides.

And the 10-year-old grey managed to cling on by a head, saving the young jockey’s blushes.

The commentator was taken by surprise and exclaimed as they crossed the line: “He cocked up a bit early!”

This is too close for comfort! pic.twitter.com/nHzUcrdcGX

Racing fans found the near-miss hilarious, with many recalling the time Luke Nolan almost lost the Diamond Jubilee Stakes at Royal Ascot on legendary sprinter Black Caviar back in 2012.

Under a huge amount of pressure to preserve the wonder mare’s unbeaten record, Nolan moved Black Caviar clear a furlong out.

But he eased up and held on by a whisker from the fast-finishing Moonlight Cloud in one of the most dramatic finishes in Royal Ascot history.

This finish wasn’t quite on the same big stage, but punters joked how claimer Mitchell almost gained fame for all the wrong reasons.

Another added: “Aaron Mitchell almost got the whole jumps season off suspended.”

While another Tweeted: “Aaron did the Luke Nolan!”

It wasn’t a laughing matter for Mitchell, who was stung with £300 fine for failing to ride his horse out to the finish.

Mind you, it won’t hurt his pocket too much.

The youngster has ridden over 200 winners in his career and bagged a whopping £3,000,000 in prize-money.

Advertisement. Scroll to continue reading.
In this article:inmelbourne, thebag, theline