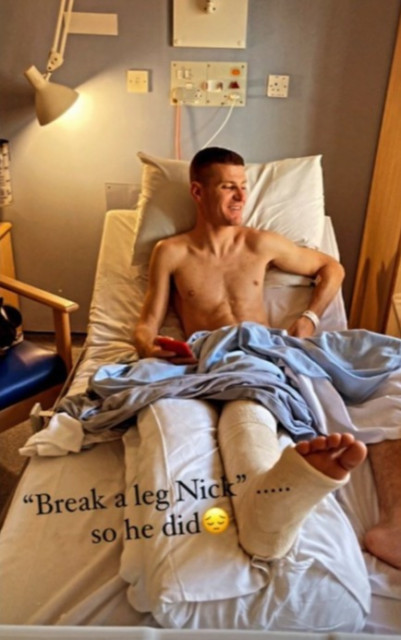 JOCKEY Nick Scholfield was rushed to hospital with a broken leg after a freak collision with a loose horse.

His girlfriend and fellow jockey Hayley Turner this morning posted a hospital bed photo of Scholfield with his leg in a cast.

Scholfield appeared in good spirits despite his right leg being out of action and Turner captioned the photo: “‘Break a leg Nick’… so he did.”

Scholfield finished fourth on Shintori but it was while dismounting after the race that Bridget Andrews’ ride Go Steady charged into him.

But it blundered and unseated Andrews three out, sending her crashing to the turf.

The loose horse then veered right into Richie McLernon’s Haldon Hill and forced him to take evasive action.

But worse was yet to come.

After hoping off 7-1 shot Shintori, the loose horse charged into Scholfield and broke his leg.

Fans were quick to send messages to Nick wishing him a speedy recovery.

Another posted: “A once in a million incident, poor Nick.”

It is unclear how long Scholfield will be out for but a broken leg usually means a recovery period of several months.

Scholfield was not as lucky as Chester Williams, who came within inches of being trampled by his own horse at Newbury.

Amazing photos showed how Williams managed to just avoid potential disaster following his fall off One For The Team.

Advertisement. Scroll to continue reading.
In this article:Chester, Fontwell, Newbury