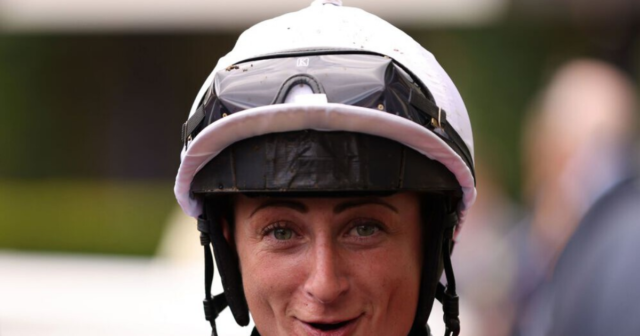 “PEOPLE quickly forget who you are and what you’re about.”

Nicola Currie’s words are true in any walk of life, but no more so than in racing.

Currie is hoping to recharge her career after ‘chasing her tail’

And the rider admits she has found the going tough in recent seasons.

After flying through her claim and hitting the big time with Jamie Osborne in 2018, she suffered an injury and suddenly it was back to square one.

That season she was champion apprentice on the all-weather and booted home 81 winners from nearly 800 rides.

Last year that dropped to just 23 winners from fewer than 400 outings.

With the likes of Hollie Doyle, Laura Pearson and Hayley Turner flying high, Currie is determined to push her way back to the top of the pecking order.

And if Ascot’s recent Shergar Cup win and top jockey trophy is anything to go by, trainers will be queuing around the corner to use the 28-year-old from the Isle of Arran.

She has also been thrust back into the limelight in the William Hill Racing League, where she rides in the pink of the Racehorse Lotto team.

Currie said: “There are so many jockeys coming through these days and people quickly forget you. There are more jockeys  but better riders too.

“You’re constantly looking over your shoulder. If you miss a day or you go somewhere else one morning and someone else rides it out for work, suddenly you can lose a ride.

“Like not even a week before my injury I rode Raising Sand to win at Ascot, which was also more or less when I lost my claim.

“They’re the winners you need on that stage with everyone watching but just after that I had my injury and I was out for over two months.

“Ever since then I’ve been chasing my tail trying to get back to that level.

“It’s not easy. The racing world is hard and you need to stick it out.”

But Currie is tough and has built up plenty of new contacts, having gone freelance after a split with Osborne. That job went to Osborne’s daughter Saffie but Currie always knew that day would come and is more than happy to prove herself.

A new link with rising star George Boughey has proved fruitful and a double on Shergar Cup day had her back in the headlines.

She said: “I always knew Saffie would come along, but I don’t think it was the worst thing to happen to me. It wasn’t the best timing but I try to look at it positively.

“As a freelance, it allows me to do things like the Shergar Cup. Part of the game is about putting yourself in the shop window and hopefully the Shergar Cup helped. You need to be doing it on the big stage. Hopefully it opens a few more doors.

Can we do it all over again? @Hayleyturner123 @MickaelleMichel
Thank you for the messages and support- an amazing day!
Delighted to be wearing my new sponsorship @sbk pic.twitter.com/KBXJHnLEHj

“You’re obviously riding for trainers you wouldn’t normally do. It’s probably still too early to tell just what will come from it but the phone has been busier and I’ve got a few more rides this week than might have been the case.

“I’m hoping it will give me a chance to pick up some nicer rides, rather than just pure numbers.

“Earning a living and driving to Wolverhampton for a few is fine, but I actually want to be successful and being on the stage when it’s those big days is what it’s really about.”

Currie’s countrymen on the island off the west coast of Scotland with a population of just 5,000 still tune in to her races at one of the pubs.

She said: “I’m certainly the only jockey that’s ever come from up there, maybe even the only person that’s gone on to work in racing!

“I didn’t actually work with racehorses for a long time, I started in showjumping and with ponies.

Up until I was about 20 I’d never even had a day at the races. Lucinda Russell gave me my first ride on the Flat and she was very good to me.

“But I thought I don’t just want to be in this as a stable lass, I want try and be a jockey and so I moved to Lambourn.

“When I first moved down I was with Jamie Osborne, then I went to Richard Hughes and that’s where I actually rode out my full claim.

“He was definitely the making of my career. He taught me how to race ride, how to be tough and, as he had quite a few other apprentices in the yard, you had to pull your finger out, prove you were fitter, prove you would work harder for it.”

Already the new Queen of the Shergar Cup, Currie now hopes she can help Racehorse Lotto to the title in the Racing League and the Scot is a huge fan of the new event.

She explained: “I’ve not heard a negative word about the Racing League in the weighing room.

We all enjoy it as it’s something different and as part of a team you have people backing you.

“But mostly it makes such a difference when you’re actually racing for decent prize-money.

“There’s some serious money up for grabs and it makes it more than worthwhile being there, which can’t be said for every meeting you ride at.

“It has brought in a lot of publicity, which is another big plus for the sport. It can’t afford to just carry on and think that will draw people in.

“It’s definitely got legs in the long-term, there will need to be changes but, from our perspective, it’s hard not to support it and I think it will only go from strength to strength.”