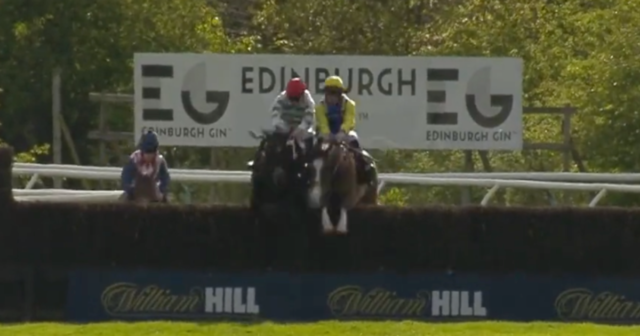 JOCKEY Stephen Mulqueen was praised for showing ‘balls of solid rock’ after escaping near disaster to record an incredible victory.

Mulqueen showed unbelievable balance not to fall from Spark Of Madness in a two-mile handicap chase at Perth on Wednesday.

Mulqueen on Spark Of Madness, right, has a coming together with Fabrique En France at the second fence
The jockey was flung out of his saddle and it looked for all the world like he was going to crash onto the turf 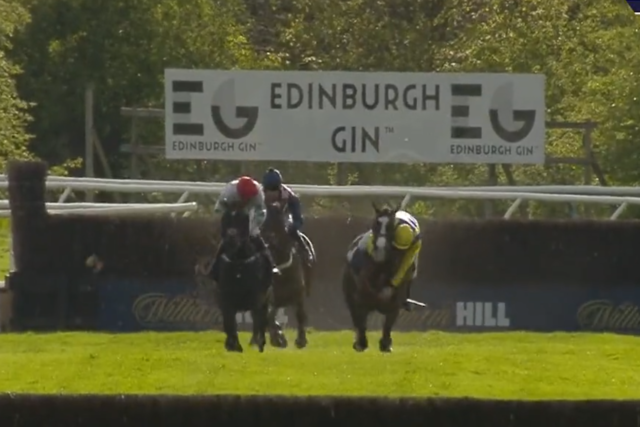 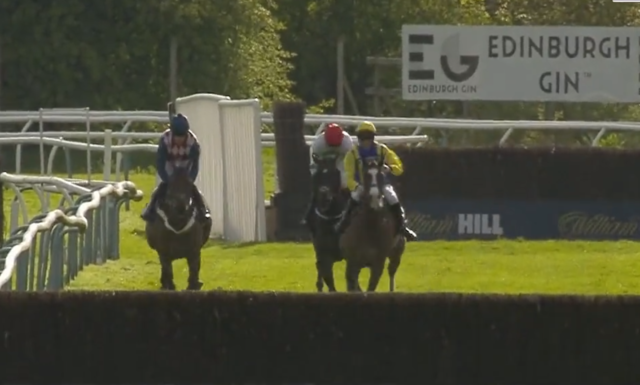 Amazingly he righted himself, jumped the next, survived another scare at the last and won the race in a thrilling finish

At just the second fence, his horse came together with Fabrique En France, one of two rivals in the three-runner field.

It looked for all the world that Mulqueen was going to crash to earth as both his feet came out of his irons and he wrapped his arms around the horse’s neck just to stay on.

Lying literally sideways across the horse, he managed to right himself as the six-year-old carried running towards the next fence in excess of 30mph.

Punters were floored by the amazing horsemanship.

One said: “He’s auditioning for a job in a circus!”

Another posted a clapping emoji with the comment: “Balls of solid rock.”

One Twitter user said: “Jumps ride of the season.”

Another post read: “Some jockey work this, bloody hell.”

Amazingly, Mulqueen then survived another huge scare at the last on the 13-8 favourite before seeing off rival Bob’s Bar in a thrilling finish.

“He said he got his foot stuck behind the saddle and couldn’t get it back out.

“I knew he had the ability to get back up, even when the chips were down. I was delighted he got back on and it’s a credit to him and to the horse because it is his first novice chase.

“It’s a credit to Stephen for his strength and tenacity to get back into the rhythm.

Advertisement. Scroll to continue reading.
In this article:fabriqueenfrance, solidrock, thesecond