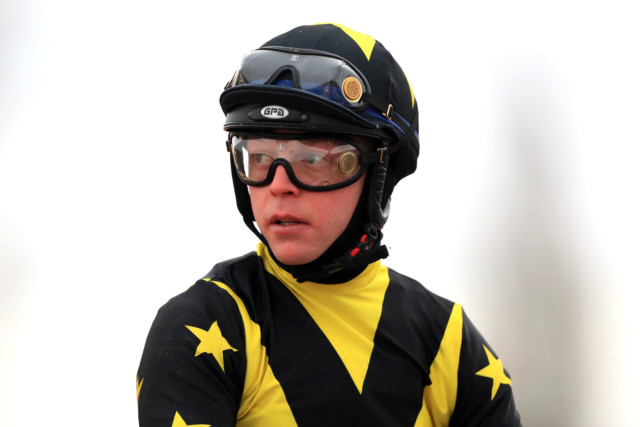 JUST a couple of years ago, Ray Dawson was battling the drink and drugs trying to make a name for himself in the relentless racing game.

But now he has a new addiction – riding winners.

Dawson, 27, gets the leg up in his first ever Group race in York’s feature, live on ITV this afternoon.

And he has a superb chance of landing his first stakes race at the first attempt on Roger Varian’s Believe In Love. But it wasn’t always like this.

Through his early twenties, Dawson faced his demons. He struggled with the lows racing throws up on a daily basis and turned to the bottle at any opportunity.

The apprentice, originally from County Kildare in Ireland, said: “A couple of years ago, before I got my act together my life was all over the place. I was never homeless, but I never had anywhere to call home as such and I was just living a bit of a crazy life.

“Alcohol controlled everything I did and changed me as a person. And then when drugs were available I couldn’t say no.

“I was drinking because I felt bad. I lost my way in my career because of it, it nearly destroyed my life.

“You get a lot more lows in racing than you do in other sports and I dealt with it the wrong way. If I got beat on a favourite or my boss had a go at me, I just ran straight to the drink.

“I didn’t have enough patience either, I wanted everything yesterday and I needed to grow up mentally.

“I knew that if I wanted to be a jockey or even just start a family I needed to get help. But I was afraid to reach out and tell people about my demons.

“Only I could change it and I put myself in that position and I was determined to get myself out of it.

“Sporting Chance were a massive part of me turning myself round and they still are. And then meeting my fiancee Abbie helped me realise what was important.

“I started to get my life back. If I’d kept it bottled up any longer I don’t know what would have happened.”

Early mornings, late nights and mile after mile in the car can take their toll when there are few rewards.

So last year’s breakthrough campaign meant the world to Dawson. And this year he’s targeting even more.

A broken collarbone following a horror fall last winter nearly put a halt to his momentum, but the jockey has made a fast start this spring.

It’s been quite the turnaround for Dawson who has shown there is always light at the end of the tunnel.

He added: “This is a massive day for me personally. If she can get her head in front, it’ll be a day I know I’ll look back on in the future as a big milestone. It would be absolutely fantastic if I can get it under my belt.

“This is my first ever ride in a Group race, I’ve only ever ridden in a few in a Listed ones, so it really is a big day.

“This is my new addiction! And it’s a positive one.

“So look, life has completely turned around for me. Things are starting to happen for me and I’m very grateful to a lot of people.

“To get this opportunity off Mr Varian is massive. He runs a huge team and it’s a big confidence boost to get the nod. I’m a claimer and can’t use that in this race. It’s great for me and her owner Koji Maeda has shown faith in me too.”

Dawson went from stable to stable trying to get the rides needed to make a living.

Spells back in Ireland with Charles O’Brien and Eddie Lynam went nowhere, before he moved to Yorkshire and tried his luck at David O’Meara’s. Then the hustle and bustle of Newmarket soon pulled him in and he arrived at Jane Chapple-Hyam’s yard.

Dawson looked like he would become another apprentice to fall away but a move to Roger Varian’s and support from family and fiancee Abbie helped turn his life around.

He said: “I’m very pleased with how things are going. I’m not long back from injury and I thought things might be slow starting up again but in fairness it’s been really good and I can’t complain.

“I’m getting a few winners each week and it couldn’t be going much better.

“I missed nearly five months with the injury, but last year I didn’t really get going until July because of COVID, so it’s a bit of a similar situation time wise this year.

“I definitely want to improve on last year’s tally, the overall goal is to get to 50 winners and then to keep kicking. Then a Group race was another thing I definitely wanted to achieve so to get the opportunity this early is amazing.”

Dawson rides out for a number of trainers with Varian, Robert Cowell, Ismail Mohammed and TJ Kent his biggest supporters.

But Dawson, who got into racing through his uncle, knows he still has a way to go and won’t be letting up anytime soon.

He continued: “I’m pretty busy in the mornings, it’s full on. But you have to do it, creating contacts is what it’s all about at this stage.

“If you’re lucky enough to land a big job later in your career, you can wind down a bit. But at this moment in time, if you’re not there, someone else will be there.

“I got my first ride in the Shadwell colours not long ago at Chepstow and that was unexpected.

“That was a proud moment to win in those colours on my first ride. This game is full of surprises, it can be bad surprises, but when it gives you good ones it can be nice and you have to make the most of them.”

Win or no win today at York , don’t be surprised if Dawson’s story continues to go from strength-to-strength.