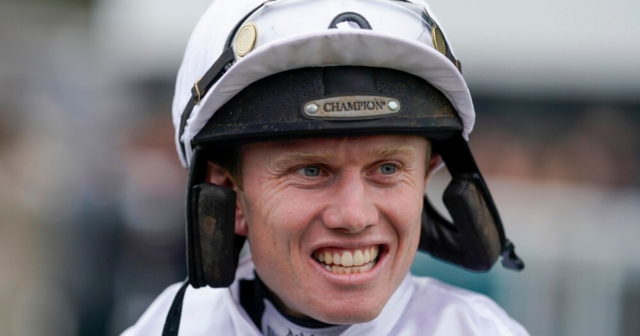 JOCKEY Josh Moore faces a lengthy spell on the sidelines after suffering nasty injuries in a fall at Plumpton.

The rider broke his back and several ribs after a heavy fall on Botox Has at the Sussex track on Monday.

He was riding the five-year-old, who is trained by his dad Gary, on his chasing debut.

The horse was the odds-on favourite and the race had gone smoothly until he made an error at the 11th fence.

Moore was sent fired over the horse’s head and was briefly unconscious before being taken to Sussex County Hospital, where he stayed overnight.

His sister Hayley, who was presenting live for Sky Sports Racing at Plumpton, confirmed Moore’s injuries on Twitter.

She said: “Sadly Josh fractured vertebra and broke ribs yesterday at Plumpton after his fall.

“Botox Has is fine. Thanks to the great on course doctors for all they do. Lucky to have them.

“Wishing him a speedy recovery. Thanks for all your messages. It’s a tough game at times.”

Gary Moore said the jockey would undergo MRI scans before the next stage of his treatment.

He said: “He’s still in hospital at the moment and he’s waiting to have another MRI scan today. The horse is fine.”

Racing fans gave their support to Moore on social media.

One said: “Sorry to hear of Josh’s injuries, hope he has a speedy recovery.”

Another posted: “He has had rotten luck with injuries over the last few years. Hope he is back soon.”

While another added: “Thoughts with Josh, this can be a hard sport at times.”

Josh Moore had his best season during the 2020-21 jumps campaign.

He won the Grade 3 Red Rum Handicap Chase aboard Editeur Du Gite at Aintree, and has had five winners from 39 rides so far this season.

Did you miss our previous article…
https://www.sportingexcitement.com/horse-racing/gordon-elliott-to-send-strong-squad-to-cheltenham-as-10000-punters-get-ready-to-unleash-famous-roar-once-more