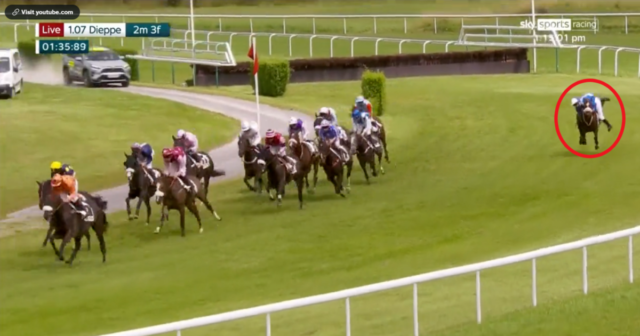 SPARE a thought for this jockey who looked to have pulled off an amazing ‘Superman’ recovery – only for it all to end in tears seconds later.

Tom Servier was aboard big outsider Normandy Beech in a hurdle race in Dieppe, France, on Tuesday. 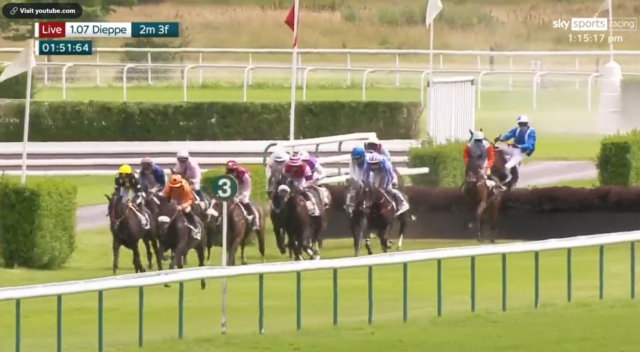 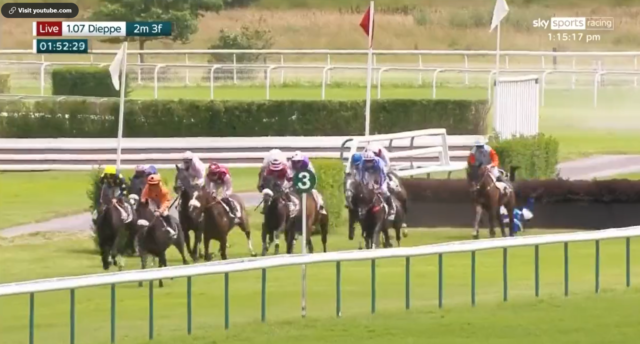 Not much was expected of the pair after they were sent off at giant odds of 61-1.

But they stole the show with a truly calamitous sequence of events that ended with the jockey in a heap on the turf.

The duo were back markers when landing awkwardly from one of the obstacles.

Servier’s saddle looked to have slipped and he lost his irons, throwing his balance all over the shop.

Rounding the bend after the jump, Servier was thrown to one side of the horse so he lay horizontally across it.

With his arms outstretched and desperately trying to stay on, the jockey resembled Superman flying through the air.

And in fairness it was a recovery worthy of a comic book hero as the rider got back upright.

But with this feet free at the sides he had little control over the horse.

And so it proved at the very next hurdle when Normandy Beech jumped awkwardly, sent Servier to one side and ultimately crashing to the floor.

The speed of the fall sent Servier rolling along the ground, but both he and the horse were unharmed.

Punters felt sorry for the jockey’s race ending in such dramatic fashion after he tried so hard to stay on.

One wrote: “An amazing recovery from the jockey but then oh…”

Another said: “Ride of the day? Almost…”

At least he wasn’t cruising to victory like this horse in America who, with the post in sight, decided to dump his jockey through the rail.

Advertisement. Scroll to continue reading.
In this article:endintears, forit, recovery