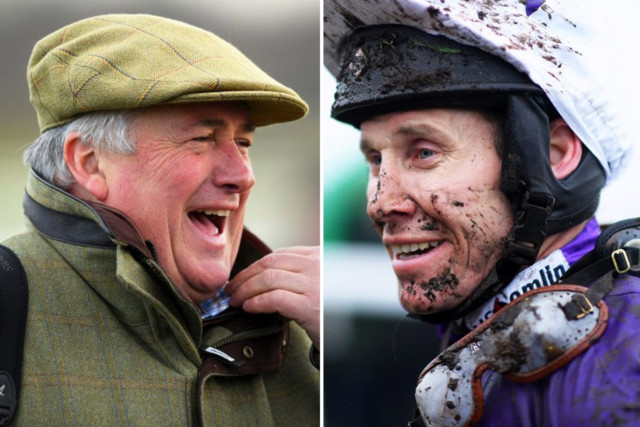 JUMPS racing returns at Southwell on Wednesday and Paul Nicholls is keen to hit the ground running.

The 11-times champion trainer will have six runners at the first National Hunt meeting in Britain since the sport was suspended on March 17.

Nicholls and Johnson have good chances at Southwell on Wednesday

Nicholls reckons it was the right decision to get the Flat season up and running on June 1 before the jumps a month later.

Nicholls said: “It is nice to get jump racing going again and it looks like there will be some competitive races at Southwell, which is good for fans of jump racing.

“The BHA did the right thing in just letting Flat racing start as those boys had missed a good part of their season, while it has also helped give us a better idea of what to expect.

“I should have a team of about 25 to run between now and October that all want better ground. Some of those will mix and match with racing on the Flat.”

Of his Southwell runners, Nicholls said: “Ashutor won a maiden hurdle at Catterick, but he always lets himself down and is not always one to trust. This looks a very ordinary novice hurdle for him under a penalty.

“He had a lovely run around Ascot on the flat and that should put him right. Two miles is more his trip, so hopefully he will run well.

“Thrave is a 90-rated Flat horse. He had a nice spin around Haydock the other day and he jumps well at home. If he can do that on the track, he should have a chance.

“Nineohtwooneoh won at Musselburgh last season. Every time we have wanted to run him the ground has been wrong, as he wants better ground. He should improve now going over fences.

“By the start of October, Richard Johnson and Harry Skelton have usually ridden a bucket load of winners, but hopefully we can give Harry Cobden as many winners as we can and have a bit of fun over the next three months.”

But former champion jockey Richard Johnson has vowed to win his jumps title back.

He lost out to Brian Hughes last season largely to his northern rival’s flying early season form, then injury and, finally, the coronavirus pandemic.

However Johnson, 42, aims to hit the ground running and has five rides at Southwell on Wednesday afternoon.

Johnson said: “For one reason or another last season didn’t go well. Take nothing away from Brian though, he was a deserved champion. He had a brilliant season and was well ahead when the season was stopped.

“I wish him all the luck in the world this season but he knows I will do everything I can to win the championship back.”

Johnson said: “It’s been a tough time for everyone but now the hard work -and all the miles on the motorway – starts again.

“I feel fit and have done a lot of riding out, running and gym work too.

“Now I just want to get out on the track. Black Anthem and Hunters Call look to be the pick of my Southwell rides.”