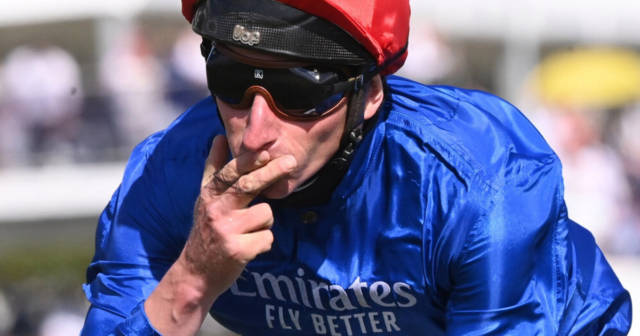 ADAYAR can star in the King George VI and Queen Elizabeth Qipco Stakes.

He could be the horse to restore the Derby’s reputation after his blistering win at Epsom in June. Charlie Appleby’s colt looked like he had a turbo as he came right away from his rivals for a convincing win.

This son of Frankel needs to back that up now and it could prove a shrewd move to keep him fresh for this assignment.

We know it’s 20 years since the King George-Derby double came off but not many came here off a little break.

Love is the big threat after her gutsy Prince Of Wales’s Stakes win at Royal Ascot. Stepping back up to this trip will help. What she doesn’t want is rain as her modest runs have come with cut.

Any juice in the ground would significantly boost the chances of Wonderful Tonight who relished the mud when winning the Hardwicke here last time.

BROOME must vroom. Group 1 winner in his own right as he showed when landing the Grand Prix De Saint-Cloud over this trip in France last time.

The quality of the field wasn’t as strong as today but it was a good performance. He was unlucky not to win the Hardwicke at Royal Ascot before that as Ryan Moore had him too far back before finishing well.

Wonderful Tonight beat him that day after a long break and it’s hard to see him turning that form around. He’s a real battler but looks a little short of this level.

RIFF sounds good. Was a quality three-year-old — winning the French Derby — but has really taken off at four, starting with his blistering Saudi Cup win on dirt when beating quality American challengers.

He improved again when taking the Dubai Sheema Classic over this distance in March. He looked rusty on comeback back from a little break when third in the Coral-Eclipse at Sandown and moving back to this trip looks a wise move.

He ran poorly in the Champion Stakes here last year but that was his only blip. Serious contender who won’t mind what the ground does.

TRUE Love. Superstar filly who did the Guineas-Oaks double last season by a total of more than 13 lengths. She signed off by winning the Yorkshire Oaks in great style even if it was a modest renewal.

We didn’t see her after that August outing and Aidan O’Brien may have left a little to work on as she took the Prince Of Wales’s Stakes at Royal Ascot on her long awaited comeback last month.

She stays well but could do with the rain staying away as three of her defeats have come with cut in the ground. If the ground’s fast she’ll go mighty close.

PRAY for rain. High-class performer when the ground is soft as she showed when coming back from eight months off to win the Hardwicke Stakes at Royal Ascot.

That was her second quality effort over today’s course and distance as she was an impressive Champion Fillies and Mares winner here in October. The ground was testing that day too as it was when she landed a Longchamp Group 1 earlier that month.

She’s classy and stays this trip well but ran badly on quick ground when tried last season so needs that rain.

ADAY dream. Looked the best Derby winner for many years when scoring by more than four lengths at Epsom.

The clock backed up that visually impressive effort with the step up to this trip bringing plenty of improvement. He needs to raise his game again here, but not by very much, and the weight allowance he gets as a three-year-old could prove decisive.

Trainer Charlie Appleby is in good form and he should be able to cope with any ground. He’s proven with a bit of cut but isn’t bred to need soft. There’s more to come and he can mix it with the best today.

EAGLE has wings. Was a few yards away from winning the Irish Derby at The Curragh last time only for the high-class Hurricane Lane to nail him on the line.

That was a big step forward for Martyn Meade’s three-year-old who was behind Adayar in the Sandown Classic Trial in April.

He gets the weight allowance too and won a Listed contest in the soft at Goodwood so should be fine if the ground eases. This is a sterner test again but it’s early days so he could improve.