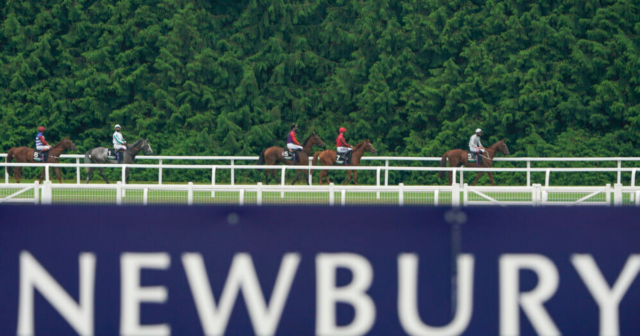 ONTHEROPES can land a knockout in the Ladbrokes Trophy.

He won the Munster National after a long break last month and has more to come for Willie Mullins.

Eklat De Rire comes from the dream team of De Bromhead and Blackmore with every chance. He landed a Listed contest nicely at Wexford last time.

Enrilo “won” the Bet365 Chase on his last start in April and has every chance from just 4lb higher.

Annamix and Brave Eagle look the pick of the each-way prices.

LOAD of Bull. Goes well in a big field with a Punchestown Festival win and solid second in the Kerry National. Stays well but can make errors and is 10lb higher than last success.

RIRE we go. Looks a hot prospect for De Bromhead and Blackmore after Listed win at Wexford last month. Best has come in the mud but he looks a real stayer and should improve plenty at this early stage of his career.

CAP fits. Brilliant winner of this last year and followed up with a Kelso Listed win. Is 18lb higher now but will be fitter for his comeback at Cheltenham latest. Trip and track suits so he could bag a place.

IN Mix. Good Kerry National third in September and went close in a small-field Grade 3 at Punchestown last time. Stays well and rider’s 5lb claim helps. One of the better outsiders.

ON fire. He came back from almost a year off to win the Munster National at Limerick for Willie Mullins last time. He stays well and is a solid jumper who has few miles on the clock. He’s up the weights but has more to come.

FIDDLE sticks. Was a good second in the RSA Chase at the Festival in March before jumping badly at Aintree. Back to his best with a Listed win at Carlisle on comeback last month. Yet to win beyond 2m4f but shapes like a stayer.

LIGHT up. Cracking second in Bet365 Chase at Sandown in April and two good efforts since, including second in the Charlie Hall at Wetherby. Trip suits and is only five so can improve, although 14lb above last win.

BRAVE pick. Some promise at Chepstow on comeback and will be fitter for it. 3lb below last winning mark so could outrun his odds.

NO Mister. Beaten when unseating in this last year having finished sixth in 2019. Two poor runs this season and hard to fancy.

HEAD home. Grade 2 winner at best but has struggled since a heavy fall at 2020 Cheltenham Festival over fences and hurdles.

POTT to trot. Lucky winner of the Bet365 Chase at Sandown in April and went close on comeback in the Badger Beer Chase a Wincanton. He stays well and looks on a fair mark so should be in the mix again.

RIL deal. First past the post in the Bet365 Chase before being demoted to third. That built on a good win here and he’s a fair 4lb higher than his Sandown mishap. This trip suits, he handles any ground so looks a major player.

MASTER plan. Ran a cracker over hurdles on comeback at Aintree and has some decent chase form including an Ascot Grade 2 win. Was a solid National Hunt Chase fifth at Festival so may need further.

LO blow. Landed decent Wetherby win on Boxing Day but has gone backwards since. Fell at The Chair in the National and was poor at Bangor on comeback. Best watched.

HOLLOW promise. Bounced back with a close second at Cheltenham on comeback when collared on the line. Not sure to repeat that but each-way player if he does.

DE-light. Landed two fair handicaps this time last year and held his own in an Ascot Grade 2 when last seen in February. Stays well and has more to come. Chance if fit on this return.

CLOUDY skies. Almost landed a shock in the Kim Muir at Cheltenham and runs off the same mark here. Can be forgiven a poor run at Aintree but needs another personal best for this.

FORT short. Fair form in lesser races and has plenty of staying power. Needs more on this hike in class.

BACK number. Has won a couple of novice contests in the mud and needed his comeback at Chepstow last month. More rain would help and this is a sharp hike in class.

NEEDS More. Ended last season with a good Ayr win but struggled on comeback at Ascot and needs a big step forward.

FLEE Whizz. Has left Paul Nicholls after a poor last season where he went backwards. Down the weights and has run well here before but needs a lot more.