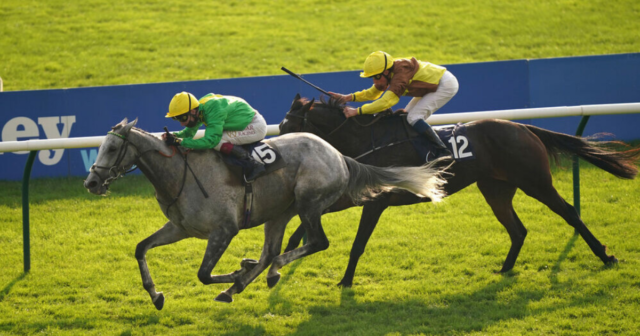 The seven-year-old grey was 7-4 favourite for tomorrow’s Long Walk Hurdle at Ascot and heavily fancied for the Stayers’ Hurdle in March.

But trainer Henderson said the Cesarewitch winner had a suspected fractured pelvis after a final spin on Friday.

Henderson said: “We think he’s fractured his pelvis, we don’t have too many details at the moment as it’s just happened but he’s suffered a pretty severe injury.

“He was just doing his last little spin for tomorrow and about 100 yards from the end – bang.

“We’ve had a lot of horses that have recovered from a fractured pelvis to race again. The immediate danger is that he doesn’t have an internal haemorrhage, but we were lucky in that we had a vet there within minutes.

“I was encouraged – we all were – with how well he actually managed to load considering he was on three legs and he was being very sensible.

“There’s nothing we can do in the short term for him, bar painkillers, but the vet is almost certain he’s fractured his pelvis, the wing of the ilium probably.

“The most important thing is that he stays as still as possible and as long as he doesn’t haemorrhage, which is the dangerous part, if he gets through that it’s just a matter of standing still for quite a long time.

“We have had them come back from this. For his own sake he needs to be a good patient but he is at the moment.”

Buzz has won nine of his 25 races under rules but has been transformed since moving to top trainer Henderson in November 2019.

He won two Class 4 races on his first two races under the Seven Barrows supremo before reaching new heights at Newmarket in October.

Buzz claimed the £128,850 Cesarewitch at 8-1 under Oisin Murphy – who has handed in his licence to go to rehab – before scooping the Grade 2 Coral Hurdle at Ascot last month.

Did you miss our previous article…
https://www.sportingexcitement.com/horse-racing/jockey-ben-curtis-reveals-excruciating-lengths-he-is-going-to-just-so-he-can-wear-shoes-again-without-constant-pain