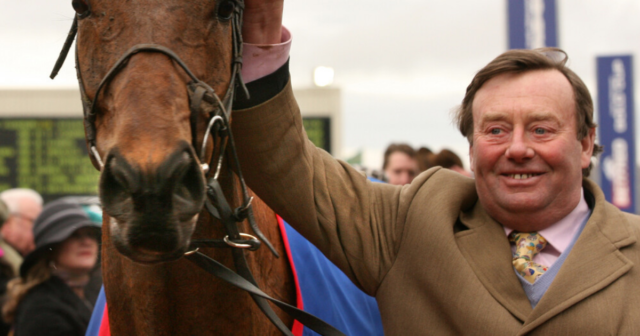 LEGENDARY racehorse Bobs Worth has died aged 17 after a ‘freak accident’.

Bobs Worth was a legend of the Cheltenham FestivalGeraghty paid tribute to the superstar horse, who passed after a ‘freak accident’

A post from their Twitter account read: “It is with great sadness that we have to announce that Bobs Worth has suffered a freak accident in the field and has passed away.

“He was more than a horse to us, part of the family and will leave a huge void in our lives.

“RIP our friend and thank you for the amazing memories.”

The Nicky Henderson-trained superstar made the Festival his own as part of a career in which he won £690,847 for owners, the Not Afraid Partnership.

He was victorious in the 2011 Albert Bartlett before winning the RSA the following year.

In 2013 he landed the biggest of all with a seven-length victory in the Gold Cup.

Iconic Irish jockey Barry Geraghty was in the saddle for all three wins and he paid tribute to a ‘real star’.

The Grand National winner tweeted: “It is so sad to hear Bobs Worth passed away this morning.

“He was loved and adored by anyone who was ever involved with him since we had him as a youngster to his time @sevenbarrows and in his retirement with Charlie & @wickhamwicks and their boys.

Bobs Worth last raced in the Ryanair at the Festival in March 2016, where he finished third to Thistlecrack.

Social media was flooded with tributes from punters remembering his brilliant career.

One said: “Such sad news, fabulous racehorse and a superb attitude.”

Another posted: “I am so sorry for your loss. I know how heartbroken you must be. He was the most splendid of gentleman and I shall always remember him.”

One comment read: “Very sad to learn this. Super horse and so much heart.”

Another said: “Possibly the toughest national hunt horse of this century and my personal favourite. A sad day.”

A fellow Twitter user posted: “Terrible news. He was such a lovely horse.”

One comment read: “I have never loved a horse like I did Bobs Worth. A true warrior with the heart of a lion despite his diminutive stature.”