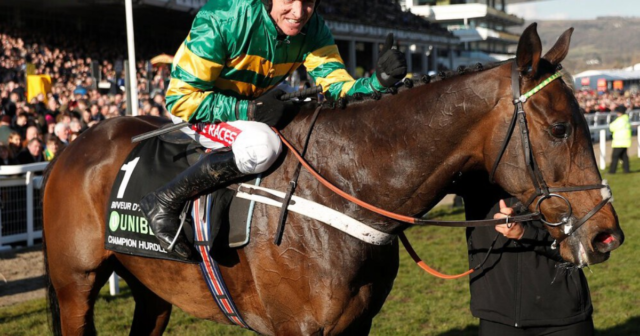 The superstar duo are among the riders taking part in the Legends race at Doncaster on Wednesday.

"There will be no inch given and no inch expected"@BarryJGeraghty is expecting a competitive affair as he lines up against the likes of @dickyjohnson77 in the @Legerlegends @DoncasterRaces tomorrow, live on Sky Sports Racing pic.twitter.com/MXm9jTxlEW

Geraghty and Johnson – who announced his shock retirement in a tearful TV interview in April – were icons over jumps but will race in a 1mile Flat race.

And Geraghty, 41, a two-time Cheltenham Gold Cup winner, came out fighting ahead of his big return to the saddle.

He told Sky Sports Racing there will be no love lost between himself and Johnson as both will give all to win.

Geraghty, who announced his retirement via Twitter in July last year, said: “It can’t be any other way. We’ve all been doing the same thing for years and there will be no inch given.

“And there will be no inch expected!

“It will be good fun and I’m very much looking forward to it.

“It’s very different to be going over the mile at Doncaster, even coming out of the stalls will be different, so it will be a new one.”

Yet it’s Geraghty and Johnson who are the star attractions in the £5,400 contest that kick-starts the four-day Cazoo Leger Festival.

The Irishman is the second most successful jockey ever at Cheltenham Festival with 43 winners, while Johnson, 44, is a two-time Gold Cup winner and four-time champion jockey.

Geraghty finished his career with 1,920 career victories, while Johnson racked up a mind-boggling 3,818 over jumps.