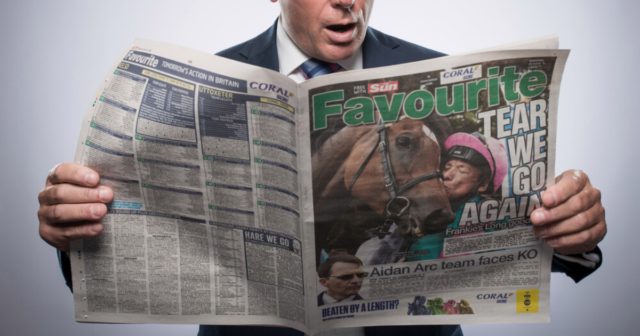 MANY of you will have never heard of Teenoso.

But there’s a little bit of Teenoso about Derby hero Adayar who back in the big time at Ascot today.  And that might not be a bad thing for his supporters.

This is the traditional mile and a half summer highlight clash of the generations, and with the opposition to Adayar headed by a star and favourite in Love it looks sure to be a cracker.

Let’s get back to Teenoso.

Trained by Geoff Wragg, Teenoso landed the 1983 Derby on desperate ground under Lester Piggott. He appeared a real mudlark.

But horses are funny things.

The following year, the ground was firm for the King George but Teenoso overcame the going to land another huge prize, in doing so disposing of a field which included two Oaks winners in Time Charter and Sun Princess.

Also defeated were the classy French Derby victor Darshaan, globe-trotter Tolomeo and super sire Sadler’s Wells. It was some race.

Adayar appears a little Teenosoesque. There’s no doubt in his early races some juice has looked useful, and it was good to soft when he slammed Mojo Star nearly five lengths at Epsom. Teenoso had scored by an easy three lengths.

Now Adayar has to cope with better going. But Appleby is still hopeful for a colt who is beautifully bred, by Frankel out of a Dubawi mare.

“Adayar is going to be our first runner in the King George,” said Appleby.

“But he’s not just a runner – he’s a Derby winner. As we know, this (Derby-King George double) hasn’t been done since Galileo, so for Adayar to turn up there is a huge occasion and a great challenge.

“Love is going to go off favourite and deservedly so on what she’s achieved, but I genuinely think we should be bang there as well. It’ll be fantastic to watch and whoever wins it will be ‘king of the mile and a half division’ for the foreseeable future.”

On the issue of the ground, Appleby added: “I doubt it will come up really quick at Ascot as Chris (Stickels, Clerk of the Course) does a fantastic job there.

“It’s every Clerk’s nightmare when you’ve got the forecast the way it is (chance of heavy showers) but even on good to firm ground I’d still be comfortable that Adayar will be able to perform at the top of his ability.”

Love must give 8lb to Adayar as the older filly. Aidan O’Brien’s beauty has won seven of her 11 starts and her last four wins have numbered the 1000 Guineas, Oaks, Yorkshire Oaks and Prince of Wales’s Stakes.

It’s easy to love Love. She’ll be a tough nut to crack and is tactically versatile. If the ground stays good to firm I expect her to win. If it turned soft I would hazard a guess Adayar will be bang there.

Both hope to not only follow in the hoofprints of Teenoso and Galileo, but also the likes of Grundy, Shergar, Dancing Brave, Nashwan, Lammtarra, Montjeu and Enable.

Not to be dismissed today will be Lone Eagle, bidding to give Frankie Dettori a record eighth success in the race.

The Martyn Meade runner only has a few pounds to find, and having won four of his seven starts ran the race of his life to finish second to Hurricane Lane in the Irish Derby last time.

He kicked clear that day, and was unlucky to be picked up by a very decent animal. He might try and steal this from the front.

Mishriff is also in the field, and of course he was huge for the Gosden’s earlier in the campaign when scoring in Riyadh and Meydan. The problem is he was truly average behind St Mark’s Basilica in the Coral Eclipse at Sandown.

Away from Ascot, the Nashwan silks are carried by Mohaafeth in the Group 2 Sky Bet York Stakes, also live on ITV. The William Haggas-trained runner missed the Derby but hacked up in the Hampton Court Stakes at Royal Ascot. I think he could be a monster.

Indeed, it’s fair to say I love Mohaafeth. On all fronts it might just be a day for Love.