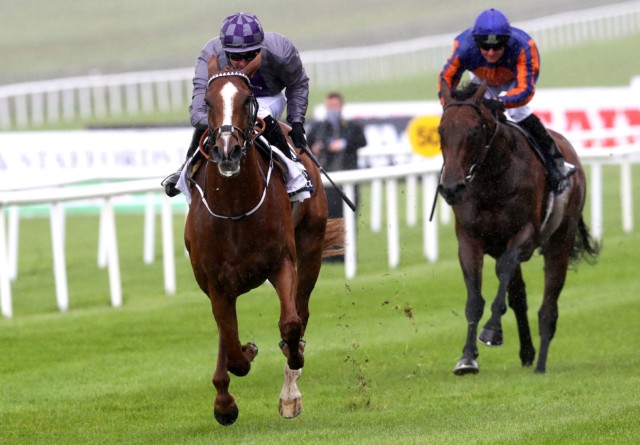 MAC Swiney edged out stablemate Poetic Flare in a cracking Irish 2,000 Guineas clash to give 79-year-old trainer Jim Bolger his first win in the Curragh Classic.

The winner held on bravely in the driving rain under a strong drive from Rory Cleary – and his odds for next month’s Cazoo Derby have plummeted.

Paddy Power slashed him into 7-1 from 20s while Betfair were half a point bigger at 15-2 for the Epsom Classic.

But that is for another day, and the legendary Bolger, who bred both the winner and runner-up, has been the story of the 2021 Flat season so far.

He trained his first Group 1 winner 40 years ago – so his first win in the Irish Guineas has been a long time coming.

He led from flag fall and one-by-one he ran the legs off his rivals in testing conditions at the home of Irish Flat racing.

But Poetic Flare (5-1), having his third Guineas run in just three weeks having won the 2,000 at Newmarket and finished sixth in France just six days ago, dug in and chased his stable companion down inside the final furlong.

They were neck-and-neck in the final strides, but the head bob at the line went the way of Mac Swiney, giving Cleary a first top-level winner.

“He jumped and travelled so easily. I wish all my rides were as easy as him.

“Jim is a very special man, his loyalty is second to none. For leaving me in charge of a horse like this is unbelievable. He’s a legend and a true gentleman.”

Assistant trainer Una Manning added: “He had a bit of mucus at Leopardstown and didn’t give a true account of himself. It was Jim’s plan to run him here and have him ready for the Derby.

“He needed a run, so why not run him in the Irish Guineas? Traditionally it’s been a very good trial for the Derby.”