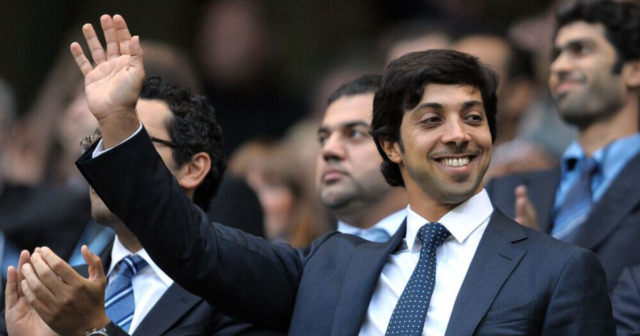 MANCHESTER CITY’S owners have registered their interest over a move into racing – after holding talks about taking over the famous Shadwell racing operation.

Sheikh Mansour, who is thought to have a net worth of around £15billion, made ‘preliminary enquiries’ following the death of Sheikh Hamdan Al Maktoum last March.

Sheikh Mansour held talks over a move into racing

Sheikh Hamdam’s passing aged 75 plunged the racing world into mourning and his hugely successful Shadwell operation was taken over by his daughter Sheikha Hissa.

The yard suggested it would be scaling back its size after the death of its leading figure.

And it said there was to be a ‘full review of all its activities that will result in important changes for the business’.

Chris Kennard, UK director of Shadwell, said the loaded deputy prime minister of the UAE had been in touch about a purchase.

But the top-level discussions between the yard and owner of the Premier League champions fell at the first hurdle.

Asked about the talks, he said: “That is not happening.

“There was some interest and some discussions, but nothing came to fruition.

“There was a discussion but it did not lead anywhere.

“As is evidenced by our earlier announcement, we are undergoing a reorganisation and nothing is set in stone at the current time.”

Sheikh Hamdan set up his Shadwell operation in the 1980s.

It grew to become one of the biggest and best in the world, his blue and white silks carried to victory by legends of the game such as Nashwan, Battaash and current superstar Baaeed.

This season alone horses running under the Shadwell name in the UK amassed earnings of more than £3.8million.

There, greats such as Mohaather command a stud fee of £15,000 a go, adding to the lucrative money-making potential of racing.

Although scaling back the yard’s scope, Sheikha Hissa wants to remain in racing and there are, according to Sky Sports, no plans to sell any of their stallions.

Did you miss our previous article…
https://www.sportingexcitement.com/horse-racing/dramatic-dead-heat-controversy-sparks-punter-uproar-due-to-dodgy-camera-angle