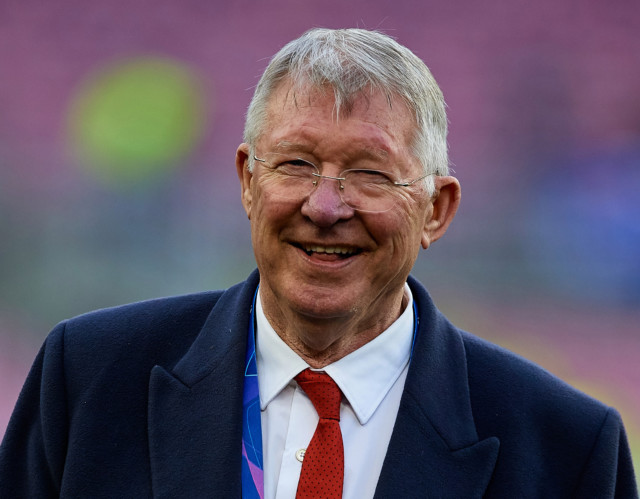 SIR ALEX FERGUSON landed a massive 108-1 treble on the first day of the Grand National Festival.

Protektorat was a 17-2 winner in the first at Aintree – and the Manchester United legend followed up with 10-11 favourite Monmiral in the second.

Clan Des Obeaux then completed the three-fold when winning at odds of 5-2 in the third race.

SunSport tipster Templegate goes through the horses in the remaining race below.

HITMAN was one of the favourites in this race but no match for Protektorat.

Fusil Raffles was at the top of the betting too but was pulled up.

The Shunter came in second at 7-2, while Hitman could only manage third at 10-3.

Phoenix Way was fourth at 28-1 while Eldorado Allen came fifth at 7-1, with Umbrigado sixth at 11-1.

MONMIRAL, also owned by Fergie, was unbeaten in four starts and gave the Old Trafford icon a brilliant win in the second contest of the day.

Harry Cobden was the jockey who rode the Paul Nicholls-trained horse over the line in first.

Second favourite Adagio challenged until the final flight but could find no more on the run-in.

Fiveandtwenty came third at 12-1 while John Locke was fourth at 16-1.

CLAN DES OBEAUX, the other Fergie horse, was a brilliant winner in the 2.50.

Clondaw Castle came second at 13-2, while Native River was third at 4-1.

JASON THE MILITANT was impressive when making all to beat some useful rivals in a Fairyhouse Grade 3 last time.

He shapes as though stepping up to this distance will suit and comes from the top team of Henry De Bromhead and Rachael Blackmore. It’s still early days and he can improve.

Mcfabulous disappointed when beaten at Fontwell last time when jumping badly. He looked a real machine when scooting in at Kempton before that and this track should be ideal. He stays well and is a big danger.

Brewin’upastorm got the better of him in that National Spirit Hurdle when showing plenty of pace. That turn of foot will be an asset at Aintree and he has every chance of figuring again.

Buveur D’Air looks a big price if able to show anything like his best form. He has a first and second to his name in this race and looked in need of his second at Haydock in January.

Nicky Henderson’s horses are going well and it would be no surprise if he runs well.

Abacadabras took an early tumble in the Champion Hurdle at Cheltenham and is a Grade 1 winner at best.

He would probably like the ground softer but has plenty of quality and should get home.

Song For Someone won well at Cheltenham in December before a modest effort at Wincanton. He has run well at Kempton so this track should suit but he needs more.

Silver Streak has improved since finishing fifth in this race two years ago and likes a speed track. He struggled at Cheltenham last month though which is a worry.

BILLAWAY ran well when second in the Cheltenham version of this and is reunited with top amateur Patrick Mullins.

He likes to be up front, no bad thing over these big fences and has staying power.

Some Man had 12 lengths in hand scoring at Down Royal last month when jumping well. He has more to offer and looks a good each-way bet.

Sametegal has jumped round here twice with a third and sixth in the Grand Sefton under his belt. He struck at Wincanton last time before running below his best at Fontwell. He can bounce back from that and won’t be far away.

Stablemate Cat Tiger can give galloping dentist David Maxwell a good spin round if repeating the form of his easy Leicester win last month.

He has form at Auteuil, which takes some jumping. Reliable Sam Waley-Cohen is good over these fences and his ride Dashing Perk is on the shortlist.

Latenightpass ran well at Cheltenham and is another to consider.

ON THE SLOPES put in an excellent effort in the Grand Annual at Cheltenham last time.

He was alongside the winner jumping the final fence but was run out of it up the hill. This flatter track should suit, as it did when he won at Kempton last year, and he goes off the same mark over an ideal trip.

Destrier has long had this race as his target and will find these conditions more to his liking than muddy Chepstow last time. He was third in a Grade 1 here as a youngster so has enough class to figure.

Getaway Trump is not known for his battling qualities but he behaved impeccably when scoring on his handicap debut at Doncaster.

That wasn’t as strong a race as this but he is a spring horse who gets his favourite ground again. That should ensure another good run.

Grey Diamond was impressive at Sandown last month and could have more to offer for in-form trainer Sam Thomas. This is a hotter contest but he has place claims.

Moon Over Germany could shine under Jordan Gainford. He won this race in 2019 and is only 6lb higher thanks to his jockey’s claim. He was held in a Navan Grade 3 latest but this will have been the target.

Frero Banbou jumped like a buck when tanking in at Sandown last time. He enjoyed the decent ground and even a 13lb rise in the weights gives him a chance.

Editeur Du Gite jumped much better when scoring at Newbury when dropping back to this sort of trip.

A repeat could see him in the mix, while Sully D’Oc AA could outrun his odds after a fair Festival effort.

ELLE EST BELLE was a winner here on debut and ran a belter when third in the Champion Bumper at Cheltenham last time.

She was no match for the Irish superstars but was comfortably best of the Brits and finished the race strongly. She can take another step forward and looks hard to beat.

Eileendover swerved the Festival with this race in mind after hammering her rivals to take a Market Rasen Listed prize in January.

That form has been franked and she has loads of pace. It’s a slight concern that she relished heavy ground last time and conditions will be quicker here.

Nicky Henderson has enjoyed success in this race and Mind Sunday looks the pick of his pair.

She took a big step forward when scooting in by ten lengths at Newbury last month. She was coming back from a year off there so should improve again.

Miss Lamb was no match for Eileendover last time but it was a good effort and she could hit the frame again. She’s won on the all-weather so will have no issues with the better ground.

Wheres Maud Gone struck on debut at Thurles and followed up on her UK debut at Ayr last month. This is a hotter contest but it’s early days and there should be more to come.

Michael Bell is better known on the Flat but his Heartbreaker caught the eye when scoring on debut at Fakenham just nine days ago.

Finest View quickened up well when getting off the mark at the first time of asking at Lingfield in February. That wasn’t a hot race but trainer Alan King will have extracted plenty of improvement since then. Decent ground will suit and she can’t be ruled out.