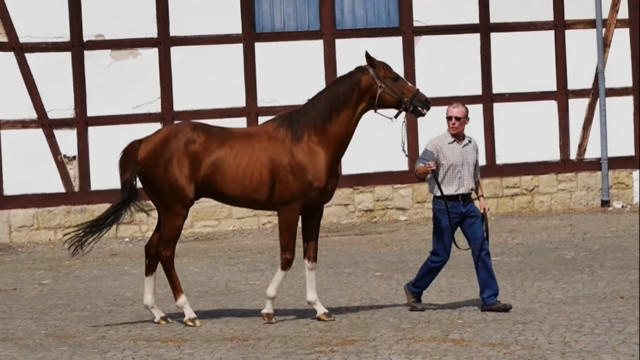 THE mare who mated with Germany’s most expensive stallion one hour before he died of a heart attack is pregnant.

The announcement comes just two weeks after leading German stallion Adlerflug, worth £4.35million, died at the age of 17 at Gestut Schlenderhan in Germany.

His last mating companion was a mare named Nicella, 14, whose owner Manfred Ostermann, 67, recently confirmed to Bild: “Yes, she is carrying a foal!”

However, the experienced horse breeder remains cautiously optimistic as the 14-year-old mare is ‘in a very early stage of pregnancy’.

He was known for being sired by the famous racehorse ‘In The Wings’ who was raced by Sheikh Mohammed bin Rashid Al Maktoum, the Emir of Dubai.

Adlerflug also sired the four-year-old racehorse ‘In Swoop’ who won the German Derby and came in second in the Prix de l’Arc de Triomphe last year.

The 17-year-old racehorse died of heart failure on Easter Monday shortly after medics saw him nervously twitching and wanting to get rid of his bridle.

The autopsy confirmed that the horse had died of a heart attack, an hour after he mated with Nicella.

The couple had already mated before and had recently had a small foal on March 6.

Nicella will be due next spring and experts are already making bids on the unborn horse since their last offspring was sold for £14,000.

Manfred, who owns a total of 30 noble broodmares, said he is aware that the foal will be extremely valuable on the market but he assures: “I won’t sell!”

Horse enthusiasts are curious to see if Adlerflug’s newest descendant can repeat his success.

Adlerflug had won lots of trophies, including winning the 2007 Derby and being crowned the 2020 stallion champion.

He was supposed to mate with a total of 85 mares during the current calendar season. Nicella was only the 24th one so far.

Breeding certain breeds of horses can be a very lucrative business with stud fees widely ranging between the low-thousands and up to six-digit figures for winning racehorses.