Matt Chapman: It’s a whopping weekend of action at Newbury – are the Irish going to continue their domination?
Advertisement 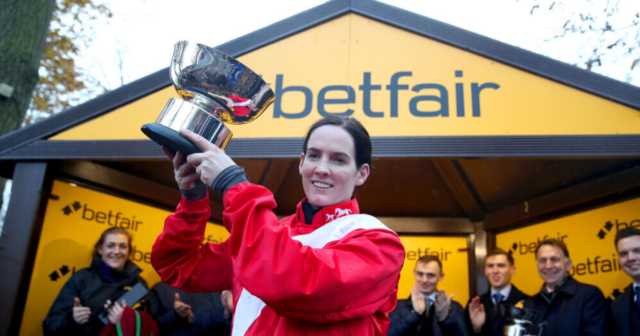 HEY! Was Cheltenham not enough?

The Irish had the home team on the ropes at the Festival, and now they are out to whip our backsides in today’s feature at Newbury. Have they no pity?!

Ireland’s champion juggernaut Willie Mullins and Henry de Bromhead – yes that de Bromhead of 2021 Gold Cup and Grand National fame – are the two raiders out to take the pounds and turn them into euros.

They have leading contenders for this afternoon’s big betting race, the Grade 3 Ladbrokes Trophy Handicap Chase, which is always a huge betting heat.

De Bromhead challenges with the fancied Eklat de Rire, but Mullins really rubs our faces in it sending over – yes you’ve guessed it – Ontheropes as well as Annamix and Brahma Bull.

The near three and a quarter mile event, known for sixty renewals as the Hennessy, remains one of the most exciting and prestigious handicaps of the jumps season.

And the list of winners is impressive, numbering legends like Mandarin, Mill House, Arkle, Bregawn, Burrough Hill Lad, One Man, Denman, Bobs Worth and Native River.

Total Recall was his fancied victor of the contest in 2017, but Mullins’s Be My Royal finished first in 2002 only to be subsequently disqualified after testing positive for a banned substance.

Ontheropes carries the colours of Cheveley Park Stud, who of course last Saturday dominated Haydock with A Plus Tard.

Someone needs to tell the owners it’s not the Lockinge! They have taken Newbury’s major Flat race with star stars like Medicean and Russian Rhythm, as well as Peeress and Virtual.

A lightly raced son of Presenting, Ontheropes was a decent winner of the Munster National at Limerick when last seen and is up 12lb here. He looks a very strong stayer and is open to much improvement.

De Bromhead’s Eklat de Rire is a similarly unexposed type, having only been in action six times. He was pushed out to land a conditions chase at Wexford when last seen having unseated in the Grade 1 Brown Advisory Novices’ Chase at Cheltenham.

It’s nigh on impossible to tell whether a mark of 154 is generous or not. But my gut feeling is it could be harsh. And my gut is finely tuned at the moment!

Of the home team many will fancy Fiddlerontheroof, who had the world at his feet when banging in the Grade 1 Tolworth Hurdle at Sandown in 2020.

However, for much of his chase career he’s disappointed until scoring at Carlisle the other day. The hope for supporters is that the Colin Tizzard stable was out of form during the poor efforts, and is now back on song.

Last year’s victor Cloth Cap is having his second run after a wind operation, and he was sensational for this column when making just about all twelve months ago. I feel this will be much harder though in his hope to join the dual winners in Mandarin, Arkle and the tank Denman.

Kitty’s Light has eachway claims for Christian Williams, as the youngster will be fighting fit and has form mixing it with Enrilo, who goes for Britain’s champion trainer Paul Nicholls and his stable rider Harry Cobden.

And as the British try to hold off the Irish attack, it’s Nicholls in whom I trust.

Enrilo finished in front of the re-opposing Potterman and Kitty’s Light when first past the post in last term’s bet365 Gold Cup Handicap Chase (Whitbread) at Sandown.

But having been two lengths clear at the last under Harry Skelton, Enrilo then hung left and despite clinging on was eventually placed third. I thought that was harsh on Skelton, as for me the best horse clearly won and was going away again once straightened up.

Enrilo was rated 143 at the Esher track, and a 4lb rise to 147 seems very reasonable. The Martin Broughton-owned gelding is young enough to improve and Nicholls is in flying shape.

Look, Enrilo is not a Denman, who goes down as one of the all time great Ladbrokes Trophy winners for the Ditcheat maestro. But he might be a Strong Flow, who the trainer sent out to score in 2003.

In many ways it seems a shame the Hennessy and Whitbread names have gone. They were synonymous with two of the most wonderful jumps handicaps in National Hunt racing.

But while the names have changed, the races haven’t and Enrilo has the chance to be a rare victor of both.