Matt Chapman: No Buick or Hollie? HUGE Saffron Beach ride could incredibly be up for grabs – and why my suit was soaked
Advertisement 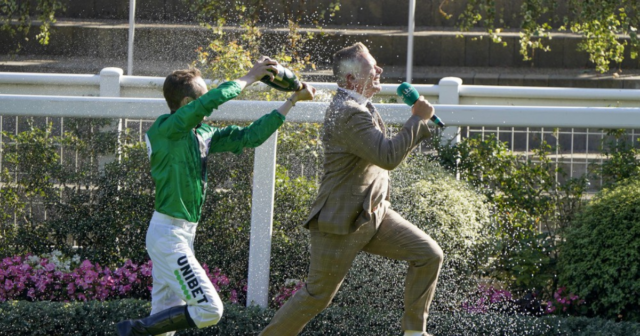 THE plum Breeders’ Cup ride on Saffron Beach could well be up for grabs.

Jane Chapple-Hyam’s fantastic filly was last seen romping to victory in the Group 1 Prix Rothschild at Longchamp under William Buick.

The daughter of New Bay is being lined up for the Breeders’ Cup Filly & Mare Turf at Keeneland.

Buick, however, is very likely to be called up for the mount on With The Moonlight for Charlie Appleby after victory in the Saratoga Oaks Invitational on Sunday.

Appleby said she could “possibly” go to Keeneland.

Even if she doesn’t, Godolphin appear likely to have other options.

Hollie Doyle also knows Saffron Beach well, but her retained ride Nashwa is also being lined up for the Filly & Mare.

Owner Imad al Sagar said to me: “That is the plan. Hopefully all goes well from now until November – the plan for her next is the Prix De l’Opera at Longchamp.”

Adam Kirby was the man who started off on Saffron Beach, but he would not be able to do the 8st 12lb if the weights are the same as in 2021.

So, one of the big Breeders’ Cup mounts might well be up for grabs. Who would you put on?

Speaking of Buick, he has really come of age in recent seasons.

It will be tough for anyone to say that he is not capable of competing against anyone on the world stage.

He was brilliant at Saratoga in the Oaks, and equally so in the Derby at the same track. There he rode Nation’s Pride to success. Fair play.

I had an interesting morning at my dry cleaners, where I tried to explain the reasons why my suit was covered in champagne.

To be honest the Shergar Cup did not totally resonate with the lady who does such a good job cleaning my stuff, but she seemed to get it when I told her a total wrong’un in the shape of jockey Jamie Spencer had turned into a nutter.

For those of you who have no idea what I’m talking about, Spencer decided to waste a perfectly decent bottle of champers by throwing it over me after his Great Britain and Ireland team had landed the booty.

A few years ago in the Royal Ascot car park after racing, for reasons best known to himself, he opted to snatch my top hat and use it as a football with fellow riders.

Initially I was just in shock, but then I realised I was in trouble when, with one misskick, the hat ended up so deep in forestry that it was impossible to retrieve.

Let’s just say the bills are mounting up Jamie. I can’t wait to invoice for both!

Over the weekend Little Big Bear was impressive in the Phoenix Stakes in Ireland, while it was fabulous to see Jason Hart with a Group 1 in France. Well done to him.

Of course winning is what it is all about, and my London and the South team got off to a flier in Racing League last Thursday at Doncaster.

I’m fully aware it can all change, and the others will be gunning for me, but I have a strong line-up going to Lingfield on Thursday. Fingers crossed the good run continues.

I hope you enjoy all the action on ITV4. Yeeehaaa!