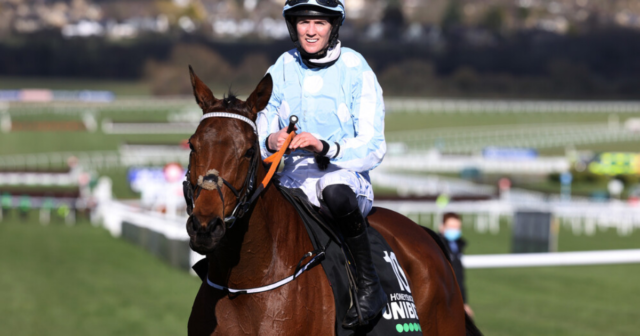 MATT CHAPMAN has called for the end of the ‘unfair’ weight allowance Honeysuckle will get next week.

Sun Racing columnist and ITV pundit Chappers says Henry De Bromhead’s mare should be racing off the same weight as the boys in next week’s Champion Hurdle.

Honeysuckle has taken full advantage of the whopping 7lb she is given when racing against the lads.

In all Henry De Bromhead’s eight-year-old has won 14 races on the trot but only FOUR have come when racing off the same weight as her rivals.

“A race like the Champion Hurdle should be a level playing field for every horse. Let’s end the inequality.

“This weight allowance ruins it and tilts it so much in favour of Honeysuckle.”

Chapman is not convinced Honeysuckle is the superstar she is made out to be.

He said: “Tell me who she has beaten? She has yet to face a top-notch hurdler.

“I fancy Appreciate It to give her a right old race next week. It’s just a shame he has to give her 7lb as well.”

Chapman also told a bumper crowd at Sun HQ: “If you want a winner next week then make sure you back Rich Ricci’s Gaelic Warrior. He’s an absolute good thing!”

Advertisement. Scroll to continue reading.
In this article:sheis, theboys, thesame