Matt Chapman: ‘The one that fascinates me is this Irish raider’ – My big tip for the Scottish Grand National at Ayr
Advertisement 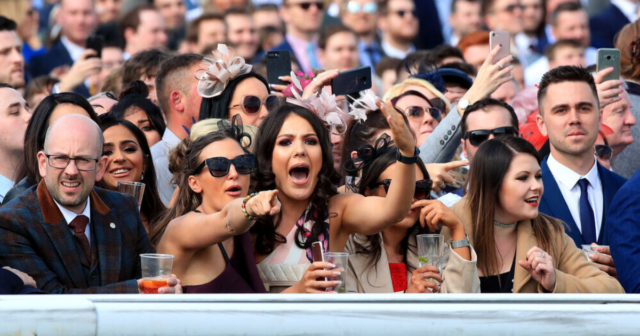 I KNOW what you are thinking. It can’t be the Scottish Grand National today. No way!

Wrong. It is. Before Aintree. How crazy is that? If you want someone to blame, then it’s the Christian calendar and Jesus rising from the dead.

To be fair, when you think about it, moving the Grand National after the Scottish equivalent seems the least we can do considering the sacrifices made back in 30AD.

So here we are, a week before we go Aintree crazy, primed for today’s Coral-sponsored showpiece which takes place over four searching miles of Scottish grass.

This is a race with history.

Red Rum might have won three at Aintree, but he’s also took this prize in 1974, as did another Aintree hero in Little Polveir in 1987. Run for Free was classy for Martin Pipe, as was Moorcroft Boy in 1996 and Young Kenny in 1999.

What hasn’t happened in any recent time is a person called Williams riding or training the winner.

Christian Williams already has one National in the bag, having sent out Potters Corner to win in Wales in 2019.

There is an element of the Viking-look about Williams, so a Scottish National should be right up his street.

The handler’s Kitty’s Light and Win My Wings have dominated the ante-post action, and while I’d be surprised if the former scores carrying 11st 6lb only a fool would rule out Win My Wings.

The latter was super impressive when landing a gamble in the Vertem Eider at Newcastle last time proving this distance holds no fears for the nine-year-old.

That, though, was off a handicap mark of 132 and she’s now up to 140. Having said that, I’d be pretty sure he would have landed the Eider with 8lb more on his back.

Kitty’s Light is up 3lb for a defeat at Kempton last time and is unproven at four miles. He’s lightly raced and will be buried away to get home, but he hasn’t won for over a year. I’m not sure about him.

The one that fascinates me is Irish raider History Of Fashion, who lacks experience and has a terrible win-to-run record but who might just absolutely lap up this distance.

History Of Fashion is trained by Pat Fahy in Co Carlow, and has only been seen Under Rules thirteen times, scoring just once at Down Royal over three miles. He hacked up that day.

That was on January 25, and afterwards he went against Win My Wings in the Eider only to unseat at the sixth fence. History Of Fashion was last out at Navan, and he kept on well without ever looking like winning in a handicap chase. It’s hard to say he’s thrown in off 130, but I suspect this trip could bring out a totally different performance. It’s a chance I’ll risk.

Fahy, incidentally, also saddles Stormy Judge under the excellent Danny Mullins. I can’t see anything to suggest he’s a strong stayer, although he did score nicely over three miles at Navan in March of 2021. He’s been lightly raced since then.

Of the others it’s easy to make a case for both The Ferry Master – having his second run after a wind operation – and Cool Mix. They were respectively fourth and fifth in the 2021 Scottish National. The Ferry Master is now rated 5lb lower, while Cool Mix is on a 6lb lesser mark. Both mix racing over all sorts of distances and might well get in the frame.

Sometimes the Scottish Champion Hurdle features a right top-notcher giving weight away, but not this time. The limited handicap is competitive, though, with the tough West Cork likely to top the market after his fine fourth in the County Hurdle at Cheltenham for which he’s been put up 1lb.

Defending champion Milkwood has to give West Cork 8lb which won’t be easy, but it might be Onemorefortheroad who is tough to stop. He’s been a credit to Neil King this term, and the progress continued last time when fourth at Sandown in a big field.

The seven-year-old is down 1lb here in the handicap and everything suggests a big run under Jack Quinlan with 10st 10lb on his back.

From Scotland to Liverpool in the space of a week. It’s life Jim, but not quite as we know it!