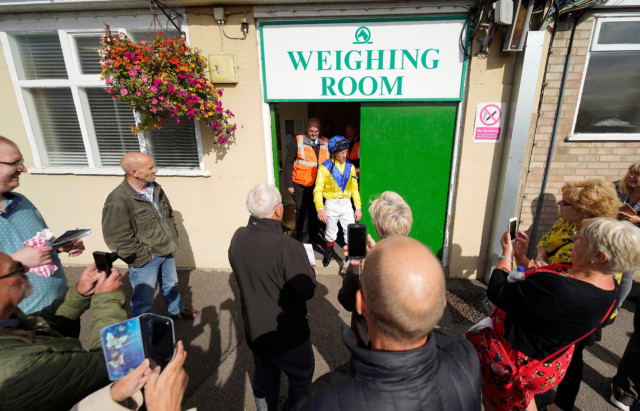 PRAISE is not something given out much in racing.

So The Monday Yeeehaaa brings rare news of a moment of magic from Richard Aldous, clerk of the course at Great Yarmouth Racecourse.

Chappers was on hand at Yarmouth on Sunday

Also, I’ll be touching on racecourse videos that I mentioned on the Opening Show on ITV Racing Saturday morning, and the man gunning for the Aussies! I always like to hear that!

First, though, back to Aldous.

Yesterday I was lucky enough to be racing at Yarmouth for Sky Sports Racing.

In the penultimate race of the day a young jockey – Kaiya Fraser – from London’s Ebony Horse Club was having his first ride in public for trainer Chris Wall.

I will have been one of a very few to have noticed what happened before the race, but Aldous, a clerk of the course I have much time for, clearly saw that Fraser’s family were watching their boy from outside the parade ring.

He walked over to them, a group of five or six, and invited them all into the parade ring to get involved.

It was a small touch, but I am sure a touch that will have meant much to all involved. Moments like this are rarely heralded.

But Aldous deserves much praise for doing what racing needs to do much more of – be inclusive, rather than exclusive. Fair play.

Praise also for Wall. He was at Yarmouth to supervise Fraser’s debut, and that was a big decision considering he had Double or Bubble running in the Group 3 Supreme Stakes at Goodwood.

That horse ran a cracker in second to Toro Strike. A good egg that Wall.

Good luck to Fraser who Wall believes has the determination to go places.

On a different topic, I think we all agree the story of the season is not being told well enough to those casual racegoers on track who don’t know everything that is going on but might be interested.

Racing needs to promote stars like Stradivarius in a better light

I’d like a promo produced regularly highlighting the best horses in the best divisions and played out at racecourse in between races on the big screens and televisions. It would need to be updated at least every two weeks.

Bang home what Starman, Palace Pier, Hurricane Lane, Adayar, Snowfall, Stradiviarius and Baaeed are up to.

Get their names in the heads of racegoers so they might want to find out more.

It would cost virtually nothing to produce, and with a strong, simple and direct voice over might just capture the attention of some. A small move. Cheap. Easy.

Added to which, I’m fairly sure there’s a company that would be happy to sponsor the concept. Cazoo would be a fine option!

“The stars of the Flat season – horse power highlighted by Cazoo”.

Finally, Ed Walker is hoping to run Starman in the Haydock Sprint on Saturday.

But his big dream is to win the Everest Sprint in Australia. He said: “To go down there and beat them would be quite cool.”