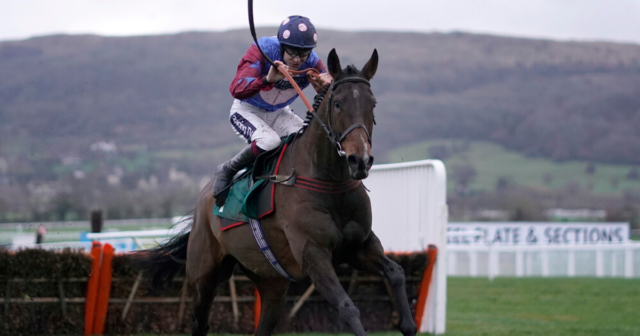 SO what would you do with Paisley Park now after his third to Indefatigable at Wetherby on Saturday?

One thing I would not do is go chasing. No way.

Paisley Park has only won one of his last six outings

On Twitter late Saturday evening I suggested Paisley Park should be tried in blinkers. It got quite a reaction, and not everyone was keen.

Some were even saying he should be retired, and that’s after a decent enough comeback run in third place.

Clearly trainer Emma Lavelle listened, as on Sunday she revealed her stable star would sport a fine pair of cheekpieces when next seen. Well done Emma. Now we just keep our fingers crossed.

Headgear is often seen as a way of suggesting a horse is ungenuine. But of course most of the time it has nothing to do with that.

Yes, there are equine monkeys out there who need a bit of help, but many horses just need a little spark up.

That, for me, is the case with Paisely Park. No sane person would ever say he is not a trier. He is. Totally.

Now of course in headgear he might be fresh and not finish off like he currently does – that was certainly the case when he had a visor on once before. But it’s worth a try. Nothing ventured nothing gained.

Not so long ago Paisley Park beat Thyme Hill and he was far from disgraced at last year’s Cheltenham Festival.

At Wetherby I thought he might be pulled up on the home bend, but the excellent Coleman didn’t give up and the horse responded all the way to the line.

There’s still an engine in there, and while some will just say he’s not as good as he once was I’m not certain that’s the case.

I can’t see any point in him going chasing. He might win the odd race, but it’s not like a Faugheen situation.

Speaking of not giving up a word for Jamie Moore, who risked getting his sidelined brother Josh rather too jiggy (if he could move) with a display of muscle in lifting home Nassalam at Ascot on Saturday.

Moore is super fit and like a weight lifter in stature. What people don’t see is the work he and a healthy Josh put in at their father Gary’s yard. They do everything – from mucking out to riding out.

The Moore stable is in rude health right now, and Jamie Moore can make hey. It’s gutting for Josh to be injured once again – he’s such a talented rider who deserves a break (pardon the pun).

Elsewhere Saturday and of course Frodon was decent at Down Royal although I wasn’t quite as in awe as everyone else.

I thought Minella Indo was disappointing to be honest and I’m happy with my ante-post selection of Al Boum Photo at 20-1 for the Gold Cup as advised on Attheraces.

He’s going to race more this season and is the one to beat for me so don’t let me down Willie Mullins.

I penned this cruising at 34,000 feat and travelling at 556mph on my way to Del Mar for the Breeders’ Cup.

On Saturday I’ll be giving you all my best bets for the weekend, but I have to say at this stage I can’t look beyond Knicks Go in a classic Breedeers’ Cup Classic and Tarnawa in the Turf.

There’s $31m on offer over two days and a record number of European pre-entries. It really does look a cracking card.

Covering Stateside meetings is where it all began for my TV career, and the US is the home of the Yeeehaaa!

I’ll bring you all the best interviews and insight on Attheraces and Sky Sports starting today for the rest of the week. Don’t miss any of the build up before the live sport gets underway on the channel Friday.

I can’t wait for it all to begin, although before the racing I’ll be taking champion jockey Oisin Murphy surfing. It might be one sport I can beat him at! Yeeehaaa!