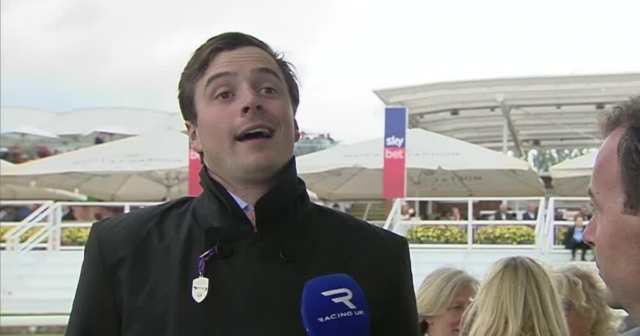 ED BETHELL is the newest trainer in the north and he’s quickly making a name for himself.

That’s easier said than done when you take over from your old man who ruled the roost for 46 years.

Bethell has celebrated 20 winners so far in his maiden season

But thanks to flag bearers Moss Gill and Fearby – who both head south to Newbury today – Bethell Jr is a handler on the rise.

The 28-year-old cares for 30 horses in Middleham, North Yorkshire, and is only seven months into his training career.

And just a week later, sprinters Moss Gill and Fearby could extend the party for another few days.

After years working around the world in America, Australia and France, as well as spells with William Haggas and Charlie Hills, Bethell is now on his own path and things have got off to a smooth start.

“But they’ve all run their hearts out and we’ve been healthy all year which is a huge thing.

“I set myself three targets, the first of which was to train 20 winners and we’ve done that. The second was to get over £200,000 in prize money and we’re already up to £280,000. That’s a brilliant year for anybody who has the number we have.

“I have a lot of people around me who want to achieve the same things I do which is a help and I want to reward them for that by finishing the year strongly. It’s been fantastic and I have to keep pinching myself.”

Bethell might be in dreamworld and of course it helps taking over the business of nearly 50 years from your parents, but the ambitious 28-year-old is not happy just to sit on his hands.

Thorngill Stables has more room at the inn and Bethell is hopeful of growing the business further in coming seasons.

He explained: “I’d love to train more horses, of course I would. I’ll be going to the sales to buy more horses and we can just see what happens.

“I’d love to grow the yard and have aspirations and ambitions to do so. But it’s one step at a time, the main thing is to keep on this upward trajectory.

“I’d love to see the numbers grow and with that the winners increase. I have a dream which I don’t want to say just yet, but of course I’d love to win a Group 1.

“You want those horses with a big name and the chance to run in the best races, that’s what we’re all here for. In five years time I’d love to be able to say I’ve won a Group 1 or at least have got close to winning one.

“I’m in it for the long run, not just a wet weekend. We want to be a big stable that everyone respects, I think that’s my main aim.

“I try to keep my cards close to my chest as I don’t want to disappoint myself and I definitely don’t want people to think I’m a complete moonman!”

Not many trainers sound as excited for the future as the north’s newest young gun. Most are happy to moan about prize money, the fixture list or staffing problems.

But Bethell is on the charge and wasn’t for one minute tempted by the bright lights of Newmarket and Lambourn. Is the north-south divide a problem? Not in Bethell’s book.

He said: “Definitely not. I’ve worked around the world for the last 10 or 12 years with some fantastic people, but I’ve grown up here.

“I love Yorkshire and have a great group of friends here with a wonderful way of life – I love training here in Middleham.

“It’s quiet, peaceful – the horses have a very relaxed atmosphere at the yard. The timings are easy to hit, I hardly see another string all morning. It’s like having a private gallop but I know I’m lucky.

“In my opinion there is no north-south divide at the moment. There are very good trainers up here – Richard Fahey, Kevin Ryan, Mark Johnston, Karl Burke, David O’Meara, to name just a few.

“There’s a great market up here now, it’s a beautiful place to train and we have racetracks everywhere.

Bethell trains down the road from the all-conquering Mark Johnston

“We’ve got great facilities and now the southern owners are realising this and they are putting their horses in the north of England, long may it last.”

Bethell makes the ten hour round-trip to Newbury with stable stars Fearby and Moss Gill this afternoon. It’s safe to say he’s not scared of chasing the big prizes.

Crack juvenile Fearby will be fancied taking on Dhabab and Gubbass in the Group 2 Mill Reef, while Moss Gill has a great chance in the Group 3 World Trophy Stakes.

Bethell said: “It didn’t go to plan in the Nunthorpe for Moss Gill. In those sprint races, if you’re not where the speed is you’re up the creek without the paddle.

“Moss Gill needs a tow into the race and should hopefully get one at Newbury. It’s a Group race, we’re going in there hopeful rather than confident, but he has an obvious chance on paper.

“The ground will be perfect for us, and we’re also going to try a new set of headgear on him.

“Fearby blew everyone away at Sandown but I think he’s been the victim of the circumstances twice after that. He got the six furlongs well at York so we can be a lot more confident this time round.

“It’s hugely exciting for us to have these two going in these big races live on ITV. It’s what we’re here for.

“Who wants to be running around Newcastle in the bleak midwinter for two grand? Not me, particularly. We have horses we can aim at Group races, I pinch myself everyday.”