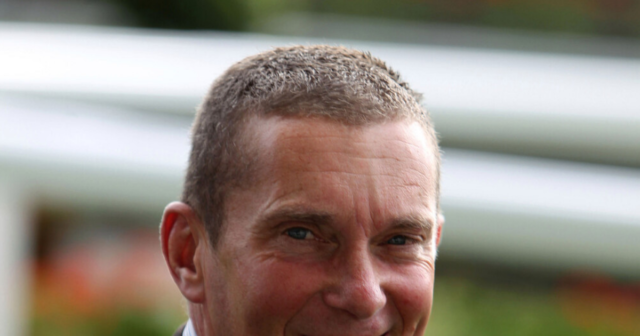 IN a different life, racehorse trainer Simon Dow might have been one of the greatest runners this country has ever produced.

He has trained over 600 winners from his Epsom stable, with Group victories on his CV courtesy of Young Ern and Mr Scaramanga.

But before he’d even come close to saddling a horse, he was one of the brightest prospects in British athletics.

He was among the top long-distance runners in the country by the age of 15 and was the cover star of ‘Athletics Weekly’ before he’d finished school.

Not a bad achievement when you consider his rivals included legendary Olympians Seb Coe and Steve Ovett.

They earned gold for Britain at the 1980 Olympics in Moscow and traded blows along the way.

Ovett upset his younger teammate in the 800 metres before Coe gained his revenge in the 1500 metres.

If he had chosen a different path, it could very easily have been Dow surging to glory in that grainy footage from the Luzhniki Stadium 41 years ago.

“I was fourth in the world rankings in my age group and I held records during my five seasons racing for Surrey.

“I was probably a hold-up type as a runner – I would come fast and late and I probably would have benefited from a set of blinkers!

“My dad was very keen for me to pursue it as a career, but when you’re in your teens you rebel against what your parents want you to do.

“I was the youngest member of the British milers club – if I’d have kept it going I may have made it to an Olympics, but we’ll never know.

“I raced with Steve Ovett and Seb Coe, we were all from the same era and I used to clock the same times as them.

“They were a couple of years older than me, so maybe I could have made it.”

The combination of injury and the pull of working with horses put an end to any potential appearance at the Olympics in Moscow or Los Angeles in 1984.

That, and regular visits to the pub with his pals!

He said: “I got spiked quite badly in a big race at the Surrey championships and got an infection in my shin bone which kept me out for a long time.

“And by that time I’d started drinking and going to the pub with my mates so it was all over at that point!

“There is a lot of mental self-discipline needed to be a runner, it’s a profession which demands total dedication.

“I had other interests and my heart lay with horses.”

The glory days of Epsom as a training centre, when Derby and Grand National winners graced the Downs, may have passed.

But Dow, who will be a keen viewer of the Tokyo games over the next fortnight, reckons the good times can come around again.

“Epsom is an iconic place and track, we have a great group of trainers here and top-grade facilities,” he said.

“It’s not as fashionable as Newmarket or Lambourn, but there is development and investment going on so hopefully things are looking up.

“I’ve trained some lovely horses here and it was only a few years ago that Laura Mongan trained a Classic winner.

“Epsom has stumbled on hard times in the past but I’m hopeful we can get back on our feet.”

IT has been an uncomfortable week for British and Irish racing following Monday’s Panorama programme.

‘The Dark Side of Horse Racing’ showed footage of some former racehorses being cruelly euthanised in an abattoir near Swindon.

It was a tough watch and it beggars belief that in this day and age there are people out there who treat these incredible animals with a lack of respect and compassion.

British racing on the whole does a brilliant job at rehoming horses at the end of their career.

The authorities are working hard to improve traceability, to stop horses falling through the net.

But they can only do so much and the onus is on owners to step up to the plate.

More needs to be done if racing is to survive and thrive – we can start by weeding out and banning the shady horse dealers who put horses through unnecessary suffering.

YOUR heart goes out to jockey Jason Watson. He’s had a rough time of it.

The 21-year-old had the world at his feet when he broke through in 2018 – riding 208 winners in his first two full seasons.

He took the job as stable jockey to Roger Charlton – but things have gradually gone downhill.

The yard’s horses have struggled and he has had several injuries, including a serious one to his neck.

Charlton had been using Watson sparingly this season before news emerged this week that they had ‘parted ways’.

To compound matters, Watson received a ban for weighing-in light at Lingfield on Wednesday and for careless riding at Yarmouth 24 hours later.

He has all the talent in the world, so here is hoping he can get his career back on track now he doesn’t have the millstone of the Charlton job around his neck.