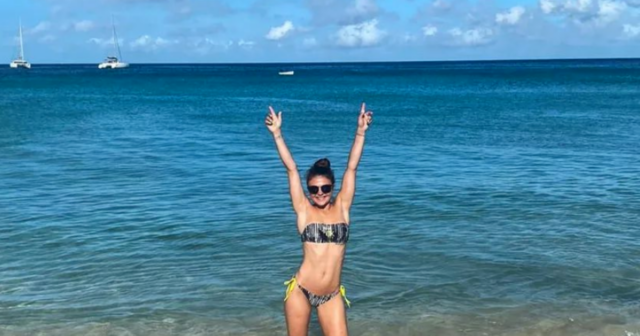 MEGAN NICHOLLS celebrated her retirement from racing at the age of 25 – by frolicking in the sea in Barbados.

Meg, the daughter of legendary trainer Paul, announced live on TV last week she was hanging up her saddle for good.

With gigs on ITV Racing and a regular on Racing TV, Meg is going to focus on her blossoming media career instead of riding winners.

But first comes some time off in the Caribbean hotspot.

A regular to the island where her old man relaxes during downtime in the National Hunt off-season, Megan posted a photo earlier this week enjoying the sea and sunshine.

Posing in a bikini, she wrote: “Woke up in Barbados.”

She has previously posted photos from breaks there alongside boyfriend and fellow jockey Kevin Stott.

She quit racing with 110 career winners but said part of her decision to retire was that she knew she could never compete at the really top level.

She said: “I started with Dad and wanted to finish with him, although I didn’t tell him this was the plan!

“I thought today was the right day to stop. In the back of my head I thought it was the perfect opportunity. It just felt right.

“I suppose it’s been kind of on the cards for little while.

“I’ve had an amazing time riding and absolutely loved it, starting in point-to-points and turning to the Flat.

Meg and boyfriend Kevin are regulars to the Caribbean hotspot

“But in the last two years I’ve been doing a bit more of the media side and I’ve very much enjoyed it.

“And I also like to be realistic. If I was talented enough to be riding at the standard of Hollie Doyle or Hayley Turner, and so on, then I wouldn’t even have been thinking about something different.

“Don’t get me wrong, I’ve had many good days, but sometimes there’s only so far you can get and I wouldn’t want to be beating around trying and never getting anywhere, so I turned my hand to something else.

“I’ve had some amazing opportunities with Racing TV and ITV and it’s kind of been a natural transition.”

Dad Paul was at Kempton to see the action and posted a photo of himself and Meg after the race.

He wrote on Instagram: “Megan and Oleg @kemptonparkrace after her final ride. 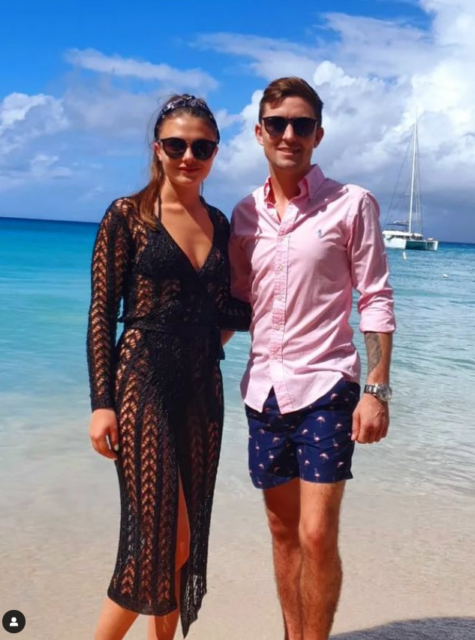 Meg, a talent jockey with a legendary father, is going to focus on her media work

“Super proud of what you have achieved since your first ride on Gwanako at Weybridge when you were 16. Good luck with new career.”

Nicholls made her debut aged 16 in 2013 and secured her first Flat winners the following year.

Her biggest win came aboard Knappers Hill, a horse trained by her old man, in a Grade 2 bumper at the 2021 Grand National meeting.

Over the past five seasons she amassed just over £670,000 in prize money.