My friends thought I was mad but now I can win £167,000 Cheltenham Festival bet thanks to genius method
Advertisement 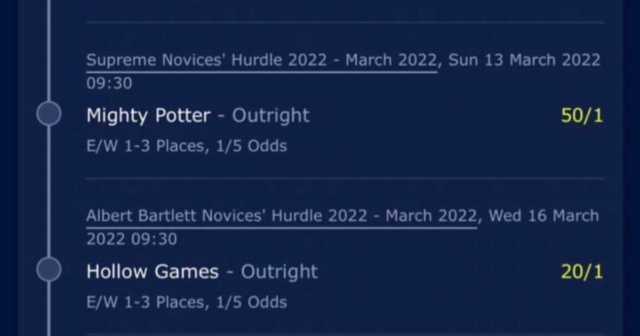 A PUNTER whose friends thought he was mad for placing a monster bet is staring down the barrel of a £167,000 payout after the odds on his horses plummeted.

One of his Cheltenham Festival picks has gone from 50-1 to a best-price 5-2.

They don’t offer a cash out service but it would almost certainly already be an attractive option were it available.

Sun Racing told you last year how one punter could earn thousands without his horses even running due to the quality of his long term picks.

Elliott Forsey, 26, from Basingstoke, has no choice but to let his bet run.

He said he tried to convince his mates to have a go on the same four selections, but they thought he was crazy picking horses all the way back in October to win races in March.

Now he could be the one laughing should they come in.

Fil Dor, who Elliott backed at 50-1, is now 5-2 favourite to win the Triumph Hurdle, with the second favourite Vauban a best-price 9-1.

Hollow Games is now 6-1 second-fav for the Albert Bartlett after being found at 20-1.

American Mike is 3-1 fav for the Champion Bumper after being picked at 12-1.

The only one who hasn’t dropped to a seriously skinny price is Supreme Novices’ Hurdle contender Mighty Potter.

Shrewd punters love picking out long term shots – known as ante post betting – because it means they can get on horses at wildly inflated odds.

But it’s a game laden with risk, and for every one of these promising punts are a load that fall by the wayside.

The horse could get injured and not run. It could go in a different race. It could skip the Festival altogether.

Elliott knew what he was getting himself into when he staked his yankee – 11 bets in all on four different selections – hence the small stake.

But he told Sun Racing that his meticulous research gave him the confidence to have a punt.

Elliott, who posts all his tips on his blog, analyses previous winners of big races, the bloodlines and trainer habits.

Some, like Gordon Elliott, have a tried and tested route for some of their horses.

Explaining how he came to find Fil Dor at giant odds, Elliott said: “I flagged this horse at 50-1 on October 26 last year.

“He was entered in the race Gordon sent Quilixios (2021 Triumph Hurdle winner) to last year.

“He sent the Triumph runner-up from 2019, Coeur Sublime, to the same maiden too.

“Gordon traditionally targets this race from Down Royal in Ireland with decent horses, so I found it interesting they sent Fil Dor to this race.”

It is a seriously clever method that has paid massive dividends before.

Punter Paul Dean was splashed across the front pages after he won £250,000 from a fiver at last year’s Cheltenham despite one of his picks falling.

Dean spent some of his winnings on a holiday of a lifetime to the States.

Asked what he would do with his, Elliott said: “Look to buy a house and take my little boy and girlfriend on a massive holiday.”

In this article:Cheltenham, Cheltenham Festival, Down Royal