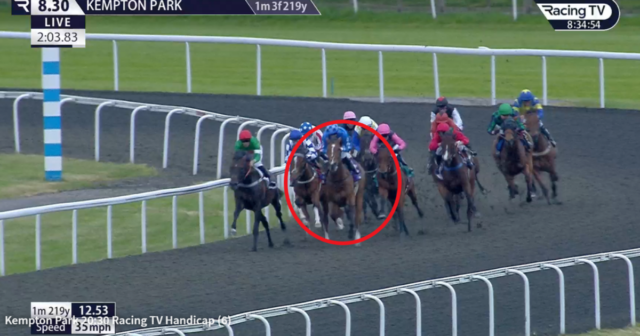 MYSTERY has surrounded an ‘unusual’ horse who won at 11-4 after being backed heavily from a whopping 33-1 to land an almighty gamble.

Bookies advised caution to those backing I Doubt That – who had never finished better than ninth in six races – in the 8.30 at Kempton last night.

I Doubt That, trained by Jimmy Fox and ridden by Pat Dobbs, wins the last at @kemptonparkrace having previously shown little in Ireland. Available at 16/1 yesterday, he was returned the 11/4 favourite. pic.twitter.com/xoKTEoxl4f

The four-year-old gelding had been beaten by a combined 173 lengths in his previous runs and gone off as high as 300-1.

But traders were quickly alerted to the cash coming onto the horse throughout Wednesday – despite the horse’s stinking record.

And despite trainer Jimmy Fox going 925 days since he last had a winner.

You would never have known watching the horse run on his debut for his new yard though, as he was a cosy half-length winner over 16-1 Lucky Draw.

I Doubt That had shown nothing in Ireland but did have all-weather pedigree on his side, plus Group 1-winning jockey Pat Dobbs in the saddle.

But the gamble was all the more remarkable considering bookies were advising ‘caution’ against following it earlier in the day.

Bookies thought the plunge was being guided by weakness in the market, rather than a substantial application of cash.

Bet365’s Pat Cooney said: “There isn’t fortunes around for it, obviously it’s a surprising horse that’s being backed.

“The jockey booking does look significant but apart from that, there wasn’t an awful lot to recommend it.

“In a very light betting race, it was probably the only horse being backed so we kept trimming it to try and find the correct price.

“It was an unusual horse to be laying at Kempton and the traders were quick to cut and keep going with the horse.”

While Betfair’s Barry Orr commented: “It’s a very liquid market and it’s not going to take a lot of money, on Sportsbook or Exchange, to drive the price down the way it has.”

It’s fair to say the gamble struck a sour note with some punters, although one probably summed it up best saying: “Happy days when you’re in the know. Frustrating as hell when you’re not.”