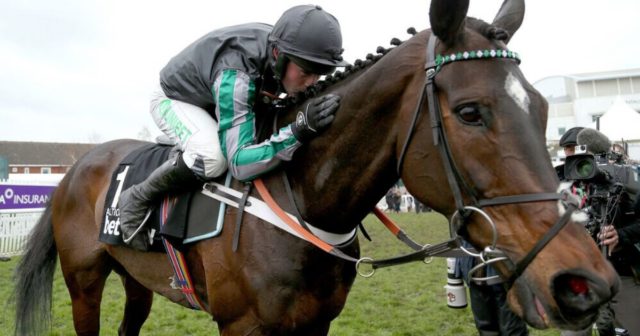 The Seven Barrows trainer paid tribute to his stable star in an emotional blog post.

Iconic racehorse Altior has been retired

But Henderson said the time was right to call it quits with his 12th birthday coming up.

Henderson said the horse had gone into ‘honorary retirement’ and wrote in his Unibet column: “We are all sad to have to say that Altior is going into honorary retirement after what has been a fantastic innings which was obviously highlighted by his 19 consecutive victories.

“His owners, Christopher and Pat Pugh feel that now he is eleven, turning twelve, they would like him to retire while still at his peak, fit, sound and healthy and ready for a new career.

“It has been a fantastic journey since Minty (David Minton) and I bought him and the Land Rover Sale as a three year old by the late High Chaparral.

“He won a bumper at Market Rasen on his debut as a four-year-old, and in his second season we had a couple of issues which meant keeping him to Bumpers for another year and amazingly he managed to get beaten in the Land Rover Bumper at Punchestown, but it was Bellshill who won so there was no disgrace in that and he remained a novice for the following season which saw the beginning of that tremendous run of success.

“The novice hurdling season was undoubtedly highlighted by his victory in the G1 Supreme Novices at Cheltenham where he beat Min, who was supposed to be the Willie Mullins Festival banker, but in all of the races Altior ever won, and there were 21 in total, I have never been more confident going into that race and he duly won as I fully expected he would.

“It’s a very tough decision to make, but I am pretty sure he has enjoyed every moment of it as much as we all have. He goes out unblemished and very nearly unbeaten, and for his retirement he is going to be looked after by Mick and Chloe Fitzgerald and I know they are as happy as we are that he is going to have a long and happy retirement with them just two miles down the road from us.

“There is no doubt you will all see him again at our open day and I’m sure he will be on parade at Cheltenham but Mick and his family will keep him entertained and busy and most of all happy which is what we all want.

“All good things must come to an end and unfortunately that time has come. It is the end of a wonderful era we will never, ever want to forget.”

Did you miss our previous article…
https://www.sportingexcitement.com/horse-racing/jockey-furious-after-other-horses-are-given-massive-head-start-has-last-laugh-with-unbelievable-ride

In this article:Cheltenham, Market Rasen, Punchestown