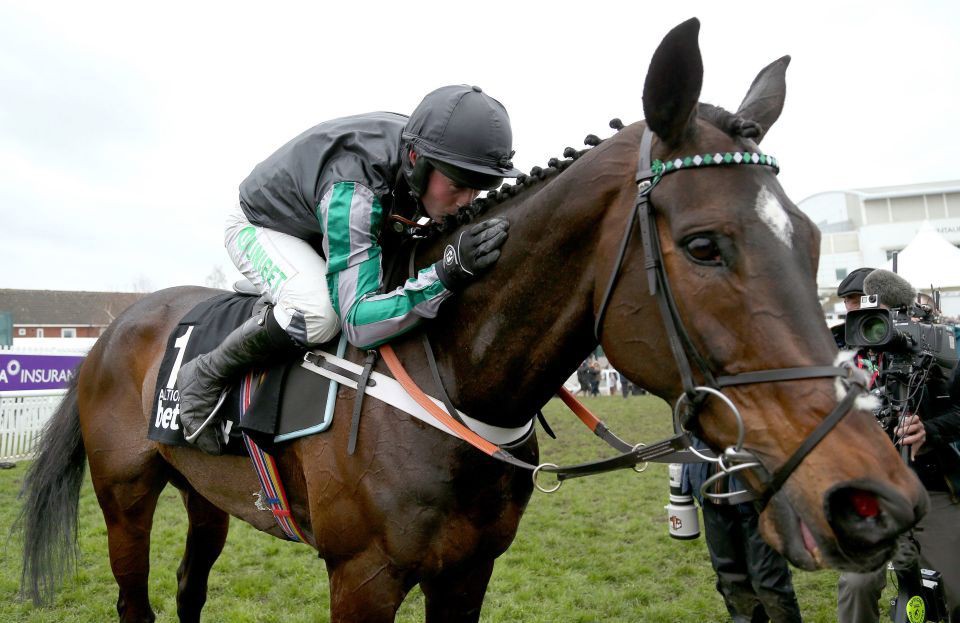 ALTIOR returns to action at Newbury on Saturday and trainer Nicky Henderson warned: hes back.

The reigning champion chaser will try to get his season back on track in the Win Bigger On The Betfair Exchange Chase, formerly the Game Spirit, having suffered defeat on his only start this winter.

He was second to Cyrname at Ascot in November over 2m5f, the first time he has been beaten over jumps, and Henderson struggled to get him right over Christmas.

The horse took a while to get over his exertions and then had trouble with an abscess, which prompted his trainer to move him to a new box.

But Henderson reckons the 10-year-old, who is the 1-2 favourite with Coral for Saturdays contest, has got his mojo back.

He said: When he schooled the other day, no horse in England would have kept up with him, he was electric.

We shouldnt have run him at Ascot, but hes still only been beaten once over 2m5f in a bog when we werent in top shape.

We werent happy with him for a little while, the race took quite a bit out of him and he had an abscess on his wither.

“We moved him into a different box with heat lamps to keep him warm and let that heal and we’ve taken our time with him.

Thats all good now and he has won this race before, so we think its a good spot for him.

He has got to prove himself again, but I think he can.

Altior poses for the cameras at Seven Barrows

The champ is set to return at Newbury on @Betfair Hurdle day this weekend pic.twitter.com/t28MOkrjWO

The five-time champion trainer is still regretting his decision to step Altior up in trip on his seasonal reappearance.

He continued: “People were saying this is boring Henderson, try him over a trip’. But we should have done what was right by the horse, not the racing public.

“They had a very, very hard race. It wasnt stamina that beat him because he didnt finish any further behind the winner than he was two out.

“He kept galloping alright. He would gallop all day for you. But he wasnt straight enough and the ground was horrible.”

Henderson will also saddle Never Adapt in the Betfair Hurdle this weekend, the feature race on a valuable card for which she is a 15-2 shot with the sponsors.

She has proven hard to settle in her races previously, but the penny appeared to have dropped when she bolted up at Kempton last time out.

Henderson said: “She has just taken an awful lot of time to learn to settle down.

“The first time she ran at Cheltenham you have never seen anything like it, it was horrendous.

“I would think that was the fastest mile ever covered at Cheltenham. She just took off. It was crazy.

“She has got better and better. She has done everything right so far this year and she has learned to race properly.”

She will be joined in the 155,000 race by Mill Green, while former King George winner Might Bite is a possible contender for the Denman Chase.