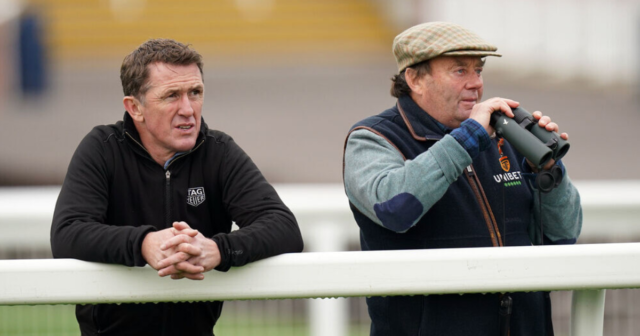 Yes folks, it was Groundhog Day down at Seven Barrows as Hendo revealed his latest chasing star will MISS a big-race target.

Henderson has decided not to run Shishkin in the Tingle Creek

I know, I know. It’ll take a little while to get over the shock.

It’s almost a year to the day that Altior was taken out of the Tingle Creek because of ‘soft’ ground – even though he had won on a surface described as ‘soft’ six times in his career.

Fast forward 12 months and Hendo has whipped Shishkin out of harm’s way in the very same race.

Not because of underfoot conditions or anything like that – he just straight up doesn’t want to run the horse first time out in a competitive race.

That’s despite repeatedly stating this autumn that the Tingle Creek “is the target” and that “everything is great” with last year’s Arkle hero.

When he broke the disappointing news on Wednesday, he conceded: “There is nothing wrong with him… but we have sadly decided not to run.

“I just got a bit behind the ball with him and I haven’t got there. We will go for the Desert Orchid at Kempton instead.”

It’s pretty incredible for any trainer, let alone a six-time champ, to admit the reason they are missing one of the biggest races of the season is because they failed to prepare their runner in time.

Not just any runner, the odds-on favourite, no less.

You can’t knock Henderson for what he has achieved over several decades during a glittering career, but that’s a pretty poor performance on his part.

Fine, the horse had a wind operation back in the summer and the recent dry spell meant he couldn’t work on grass.

Advertisement. Scroll to continue reading.
Shishkin will not run at Sandown next weekend

But given the state-of-the-art facilities at his yard, and numerous racecourses at which he could have galloped, are you telling me he couldn’t have got the horse ready if he wanted to?

The Tingle Creek is second only to the Champion Chase in terms of two-mile prestige, so his failure to have Shishkin ready by December 4 is mind-blowing to this armchair trainer.

Of course, he isn’t the only handler to dodge a big race, but we’ve been here before and he has gained something of a reputation for cherry-picking his way to Cheltenham in March.

And his timing couldn’t have been worse, what with the painfully-slow start to the jumps season and the never-ending epidemic of small-field, uncompetitive races.

But his excuses for dodging the £150,000 Tingle Creek have definitely raised a few eyebrows.

There is more than a slight suspicion that the real reason Henderson decided to sidestep the Tingle Creek is because he didn’t want a pre-Festival clash with Chacun Pour Soi – something he denied on ITV on Friday.

If it is the case, it’s a damning indictment of where jumps racing is as a sport. Too much racing, too many soft options for our big stables, too much emphasis on those four days in March.

10 days ago, I asked Henderson for an update on Shishkin during a gallops morning at Newbury.

This was his answer: “He’s good – we just have to wait and see what Willie is going to throw at us and Mr Skelton and everybody else I suppose.

“They’re all dying to have a crack, the two-mile division is very hot. Willie has got to run something so I suppose he is going to come and try and nick our money again.”

To me, that sounds like a man who is more focussed on everyone else’s horses and not his own.

But don’t worry, he will be as fit-as-a-fiddle to jog around Kempton at odds of 1-8 over Christmas.

It was a similar story with Champ earlier this month – the Gold Cup contender was being aimed at the Betfair Chase, until…

“I’ve run out of time and I’m just not going to be able to get him ready for it. So he will go to Aintree for the (Grade 2) Many Clouds.”

Someone needs to get Henderson a calendar for Christmas – and I don’t mean one with little chocolates behind it’s windows.

The British jumps game is slowly withering away, and decisions like these are only going to speed up its demise.

Advertisement. Scroll to continue reading.
In this article:Aintree, Cheltenham, Newbury