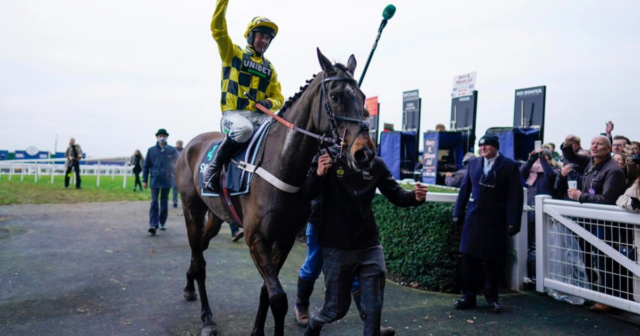 NICKY HENDERSON is already looking forward to “round two” at the Cheltenham Festival after Shishkin’s epic defeat of Energumene at Ascot.

The top two-milers fought out a humdinger of a finish in the highly-anticipated Clarence House on Saturday.

Shishkin received a raucous reception after an epic clash at Ascot

Willie Mullins’ runner looked to have his big rival in trouble at the top of the home straight.

But Shishkin engaged overdrive after the final fence to run down Energumene in the last strides, with a huge gap back to the classy First Flow in third.

He was cut into 8-15 favouritism for the Champion Chase at the Festival in March, while Energumene was eased slightly out to 3-1.

But Henderson reckons there is “virtually nothing in it” between the two horses.

And he is hoping the two chasers can stay fit and healthy ahead of a mouthwatering rematch in a little over six weeks’ time.

Henderson told Luck On Sunday: “Shishkin has come out of the race great, he is sound and well.

“It was a big battle so he is entitled to be a bit tired this morning, but he is bouncing and happy.

“They are almost certain they will meet again in March, whose to say what the result will be then because there is virtually nothing in it.

“Myself and Willie have a job to get them there in good form for round two, which promises to be as exciting as round one.

“They finished 18 lengths in front of last years winner which tells it’s own story. Nico knew exactly what he was going to do and he wanted to keep Energumene in his sights.

Pure, unadulterated equine entertainment you just couldn't take your eyes off for a second

“Things didn’t look good going to the second last but he is very tough and he stays the trip well.

“Paul said to Nico going down the hill ‘we are going too fast’ and it was furious from start to finish.

“Keeping these very good horses sound, in mind and heart and limb is very difficult, things can go wrong.

“It was a great race, but it hasn’t signed, sealed and delivered the Champion Chase.”

Reflecting on the big race, winning jockey Nico de Boinville admitted he felt Energumene was out of reach turning for home.

He added: “If I’m being honest, turning in I thought we were cooked.

“What was going through my head was that it had been a fantastic race; both horses had acquitted themselves well and it was amazing to be part of it.

“It wasn’t until he started to pick up and respond and finish off that flat spot and then really started to get running, that going to the last I was definitely thinking, ‘The game is back on here’.”