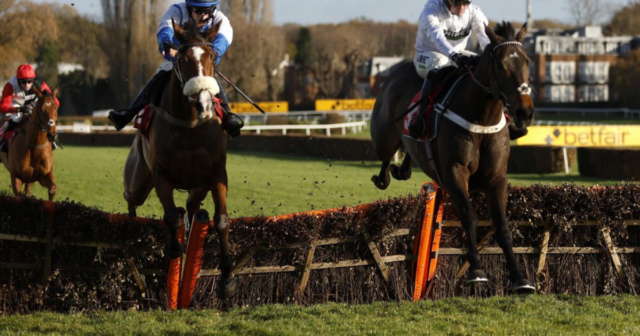 NICKY HENDERSON says Constitution Hill can prove his Worth at Sandown this weekend.

His crack novice has only had the one outing but is as eye-wateringly as short as 2-7 for the Grade 1 Unibet Tolworth Hurdle on Saturday.

And the five-year-old is already second favourite for the Supreme at Cheltenham after his dazzling win over the Tolworth course and distance last month.

Henderson said: “He’s ready to go, he was in good form after he did his last piece on Tuesday morning.

“We might as well have a go at something like this, he was very good around Sandown before and it was soft ground then, like it will be on Saturday.

“It’s a big step up for him, but it will tell us where we are. If he goes and delivers then we know we probably have a Supreme contender on our hands.”

One horse who is already a bona fide candidate for the Cheltenham Festival opener is stablemate Jonbon.

He’s the general 2-1 favourite for the Supreme after his easy Kennel Gate win at Ascot before Christmas and will have one more outing before March.

Henderson said: “Jonbon will have another run. We have a couple of options in our heads, the Rossington Main at Haydock at the end of the month or possibly the Contenders Hurdle at Sandown.

“Those are the races we have for him in our minds.”

A decision is yet to be made on Champ’s spring target, but the Seven Barrows maestro is happy to keep all avenues open after his Long Walk Hurdle heroics.

Henderson added: “We’re still sitting on the fence with Champ. Nothing has been decided but we left him in the Stayers’ Hurdle and the Gold Cup on Tuesday morning.

“I couldn’t tell you what we’ll do yet and I don’t know if he’ll have another run or not.”