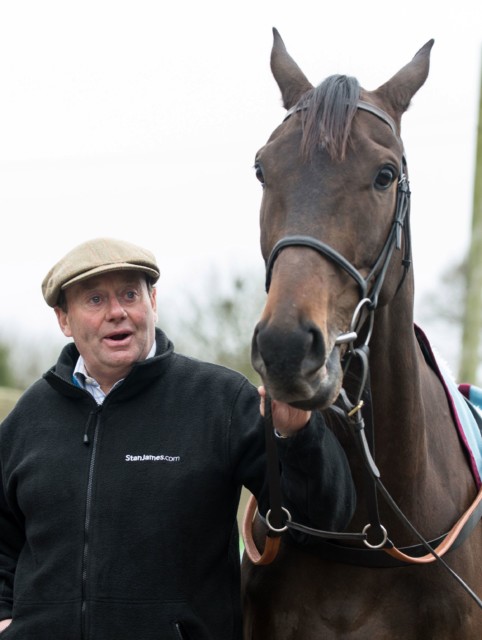 NICKY HENDERSON has warned he’ll be an ‘unhappy bunny’ if he has to abort Buveur D’Air’s comeback run at Haydock.

The track miraculously passed an inspection today ahead of Saturday’s card which hopes to feature Henderson’s two-time Champion Hurdle star.

And that was despite 93mm of rain falling and places close by to Haydock flooding from Storm Christoph.

Most thought the meeting stood no chance of going ahead and Henderson admits he’s been left confused.

He said: “We’re all a bit confused because I think the whole world expected that to be off tomorrow.

“There were some contingency plans in the locker, so they’ve obviously had to be scrapped.

“There were some contingency plans in the locker, so they’ve obviously had to be scrapped.

“I will be a very unhappy bunny if it is abandoned on Saturday because the contingency has then been wasted.

“We are surprised, I spoke to Kirkland earlier in the week and it sounded very unlikely indeed – next to impossible.

“If he says it’s raceable we’re going to go and that’s why we’ve got three going up there.

“Let’s hope it is on because it will be an absolute disaster if it’s off.”

Henderson is also set to run Festival hope Allart and handicapper Hijack on the card, but is the return of Buveur D’Air that has tongues wagging.

Now ten, the horse hasn’t been seen on a racecourse since he suffered a horrific injury back in 2019.

After hitting a hurdle, his hoof was splintered by over six inches of wood and it’s been a long road to recovery.

Henderson, speaking on TalkSPORT2, added: “After that injury in the Fighting Fifth they had to take the whole of the front of the hoof off to get rid of all the debris and wood embedded under the hoof.

“It’s been a miraculous recovery.

“He’s been sound the whole way through his preparation and that’s why I’m keen to go this weekend as we’re ahead of schedule.”

Despite the concerns, officials at Haydock are hopeful Saturday’s card should get the green light.

Clerk of the course, Kirkland Tellwright, said: “It is remarkable – we’re fit to race today.

“I suppose we can take certain quantities of rain – and beyond that, it’s just going down the drain.”

A further precautionary inspection has been called for 8am on Saturday morning because of the threat of frost.

Tellwright added: “We’ve called a precautionary inspection for Saturday morning, just to cover us for the forecast frost.

“We’d be pretty hopeful that shouldn’t be an issue. It (the course) is under frost covers. They won’t work as well as they would on dry ground, but we’ll cross our fingers and expect to race.

“In terms of rain, we’re forecast the odd shower, but nothing in the context of what we’ve had in the previous three days.”

Did you miss our previous article…
https://www.sportingexcitement.com/horse-racing/laura-pearson-went-from-tragedy-of-dads-cancer-death-to-being-uks-hottest-jockey-with-help-from-hollie-doyle