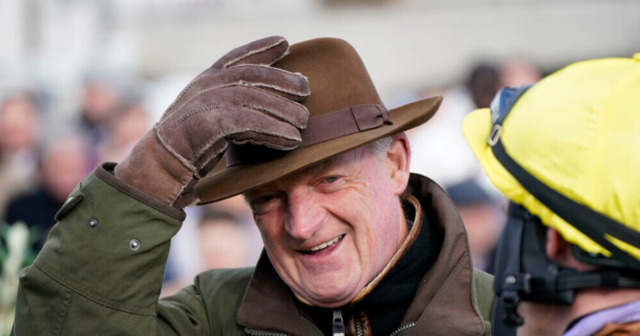 The leading trainer at the Festival is renowned for leaving it late with some of his big names.

Vautour was second-favourite for the 2016 Gold Cup until Mullins switched plans last minute and put him in the Ryanair.

Rich Ricci’s horse famously won – and it seems tactics that have worked well in the past could be used again this season.

Mullins was keeping his cards very close to his chest when speaking after another successful run for his string last weekend.

The futures are currently uncertain for the likes of Sir Gerhard, Galopin Des Champs, Dysart Dynamo, with multiple races in the pipeline.

Mullins is in no rush to commit either.

The 48-hour declaration stage means punters will have to either back a horse non-runner no bet at reduced odds, or take the plunge in the typical ante post markets.

Asked about the plans for some of his top horses, Mullins said: “We haven’t made any decision on what we do. It will be late.

“There is no reason to make anything early I think.”

The race with the biggest implication for Mullins would be appear to be the first one on the first day.

But that horse could also run over the longer trip in the Ballymore and is currently around 7-4 to win that.

Dysart Dynamo’s three of his four wins have come over the 2m Supreme trip.

The problem for punters is two-fold.

Mullins’ horses win a lot of races and at generally short prices.

The puzzle now, in the four weeks until the Festival begins, will be trying to eek out every bit of value while hopefully putting the horse in the right race.