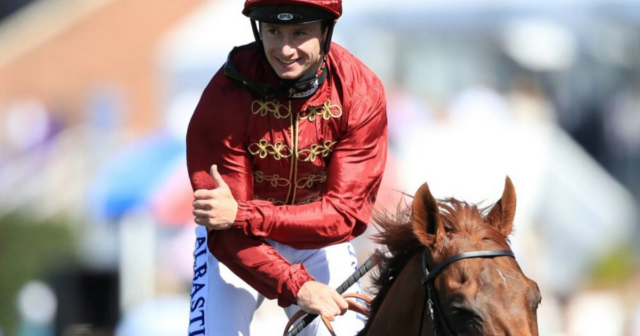 OISIN MURPHY has revealed the mystery behind the best horse he has ridden – who was banned from ever racing.

who never raced after bleeding

But he broke cover to appear on Racing Post Live‘s Saturday show in association with Betfair.

Murphy, a three-time champion jockey, has ridden superstars of the game including Roaring Lion, Kameko and Alcohol Free, amassing millions upon millions in prize money.

But he said the one that had given the most goosebumps was an unnamed filly of Deep Impact, the iconic Japanese horse who won their Triple Crown in 2005.

However, a condition meant the horse was banned from ever stepping foot on a racecourse.

This despite Deep Impact going onto become one of the world’s top stallions with his progeny reproducing some of his heroics.

Asked who the best horse he ever rode was Murphy, 26, initially said Roaring Lion was the ‘highest rated’.

But pressed for the ‘best ever’, he continued: “I rode a Deep Impact filly in work with Almond Eye once on the woodchip at Miho [training centre].

“She went past Almond Eye [ten wins in 13 runs and more than £13million in prize money] on the bit.

“I’d say that’s the best horse I ever rode.

“But she bled pulling up and that was her second time bleeding.

“There’s a protocol in place in Japan that says if they bleed, they have to have a spell off for a certain length of time.

“She was brought back slowly and she bled again so she could never race. Finito.”