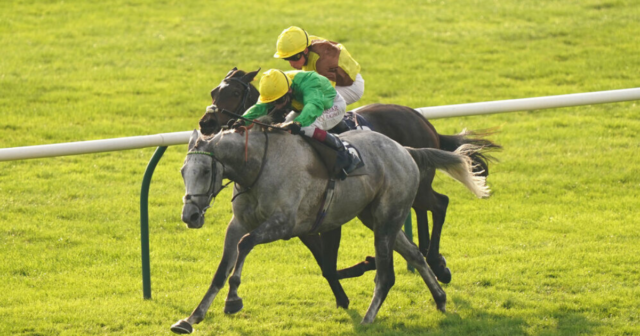 JUST 24 hours after the embarrassment of failing a breathalyser, Oisin Murphy bounced back to win the Cesarewitch.

The champion jockey cut a sheepish figure at Newmarket having been stood down by stewards for testing over the drink-ride limit on Friday.

Buzz and Oisin Murphy swooped late to win the Cesarewitch

But he was at his best in the historic 2m2f handicap as he drove Nicky Henderson’s well-fancied 8-1 shot Buzz to a dramatic late victory.

Murphy said: “It was a bad day yesterday. I’m very sorry to everyone.

“I’m not faultless and I have got to do better – it shouldn’t happen.”

William Buick has closed the gap on Murphy in the jockeys’ standings in recent days and looked set to complete a stunning four-timer at Flat HQ aboard Burning Victory – only for the reigning champ and Buzz to swoop close home.

Murphy holds a seven-winner lead heading into the final week of the title race, with this season’s champions set to be crowned at Ascot on Saturday.

Murphy continued: “I’ve had some near misses and William has got closer. I need to keep kicking.

“I have been booked to ride Buzz for about two months – these plans don’t often work out but thankfully it has.”

Earlier on the card, odds-on jolly Native Trail preserved his unbeaten record in the Dewhurst Stakes with an impressive two-length success.

It was the colt’s second Group 1 win and he cemented his position as next year’s 2000 Guineas favourite, with Coral trimming him into 3-1 from 4s.

Winning rider Buick said: “He is a gorgeous horse with tonnes of ability and he keeps on improving.

“He’s got a lot of speed but showed a great attitude to win today. It’s a privilege to ride a colt of his calibre.”

Advertisement. Scroll to continue reading.
Native Trail is the 3-1 favourite for next year’s 2000 Guineas

Charlie Appleby has an embarrassment of riches heading into next season, and he also trains the second favourite for the Guineas in Coroebus.

The improving two-year-old won the Autumn Stakes and is now just 5-1 for the 2022 Classic – and the trainer reckons he could improve past Native Trail.

Appleby said: “They’re both top-class but me and William differ a little – I have always thought there is something special about Coroebus.

“I think he is a supreme traveller. As three-year-old’s when the horses are stronger and the pace of the races is quicker, one thing you have to be able to do is travel and that is something he has in abundance.

“He has such a high cruising speed they would never be able to go too fast for him.”