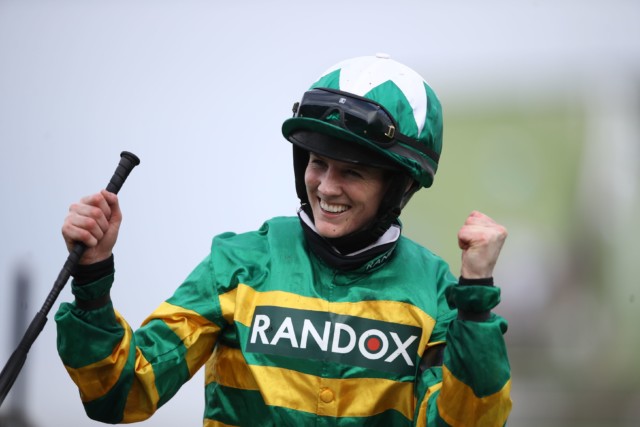 THE punters had the last laugh at Cork as a monster punt was landed.

Call Me Freddie – ridden by golden girl Rachael Blackmore – won at 11-4, having been 40-1 earlier in the day.

Blackmore recently made history in the Grand National at Aintree

The horse was backed like defeat was out the question, and at one point was as short as 6-4.

But he delivered by the narrowest of margins, getting up right at the death to win by a neck.

Wild Atlantic Lady looked to have taken the lead as they jumped the last hurdle, but Blackmore was at her best to get the Sam Curling-trained six-year-old home.

However, the horse was down to be partnered by jockey Ian McCarthy.

But McCarthy was soon replaced by Blackmore after a reported administrative error.

And once the switch was made, the money poured in.

Blackmore, Curling and the owners took the £5,500 first prize between them but it was the bookies who were counting the cost.

Paddy Power spokesman Paul Binfield said: “Hats off to the punters who backed the winner.

“We saw plenty of support from 40s down throughout the day and we felt the writing might be on the wall when we saw the pilot change.

“A proper, old-fashioned coup and well done to all involved.”

Did you miss our previous article…
https://www.sportingexcitement.com/horse-racing/oisin-murphy-tom-marquand-hollie-doyle-and-more-ready-for-flat-jockeys-title-fight-as-season-kicks-into-gear