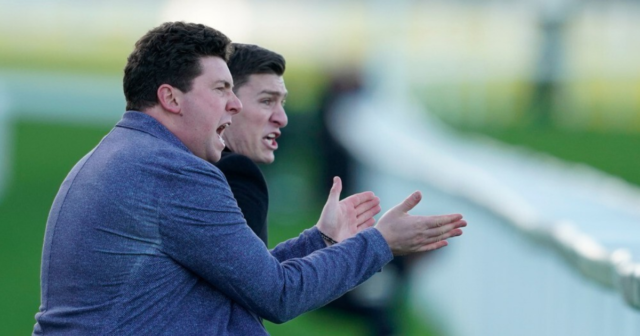 THE National Hunt season is bursting into life and at Sun Racing we have you covered.

We’ll have the latest from all the big guns as the woolly hats and jumpers come out for what promises to be another tip-top jumps campaign.

Our stable tour series kicks off with Olly Murphy as he heads into his fifth season from Warren Chase Stables, near Stratford-upon-Avon.

Won twice over hurdles last year, including a victory over McFabulous in the National Spirit, after switching back from chasing. He then finished fifth in the Grade 1 Aintree Hurdle.

“We’re going to stay over hurdles with him. He ran a lot better at Aintree than it looked – he never really jumped or travelled and got caught wide. He’ll start off at Aintree again in a two and a half mile conditions race at the start of November. We’ll stay at that trip for now and he won’t be jumping a fence again.

“We hope to have him in all the nice hurdle races after Christmas and we might look at going up to three miles at some point, he’s seeing his races out a lot better now.

“The National Spirit at Fontwell is a race we’d love to go back to and win and Aintree will be his long-term aim as there isn’t a suitable race for him at Cheltenham over his trip. He’s a very good horse on his day and I think he’s still getting his confidence back.”

Finished second to the likes of Imperial Aura and Dasher Drasher last year. Rated 153, he could yet contest some top handicaps at some point.

“He didn’t win all of last year and it was frustrating. I don’t think he was quite right all year even though he ran some quite nice races. He didn’t jump with any real fluency and burst a blood vessel, his best run came in his final start. I thought he ran really well in the Melling at Aintree.

“He’ll start in the Old Roan again and we’ll mix it with the big boys between two and a half and three miles. He’s got ability and when everything drops right for him, it’ll click in a big one.

“He ran in the Rendlesham but that was just to try and get some confidence into him again. It didn’t quite work there but he’s done a lot of work with Henrietta Knight and Laura Collett and hopefully that will pay off this year. He’ll very much have a similar campaign to last year.” 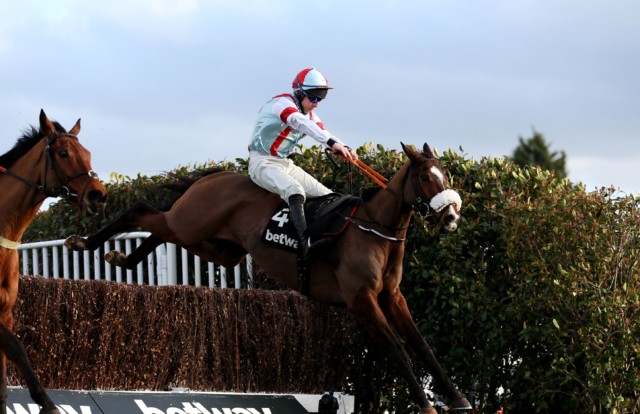 Itchy Feet is owned by Kate and Andrew Brooks

Another consistent horse for the yard, he could well improve off the back of his encouraging third to Thyme Hill at Aintree. He could make into a Stayers’ Hurdle candidate if finding a little more.

“Bar Cheltenham, where he just got no luck and locked up for the whole race, he had a good year. He ran a career best at Aintree in the Liverpool Hurdle and we’ll keep him at three miles.

“He’ll start at Wetherby in the West Yorkshire Hurdle. We think he’s got untapped potential at this trip and we’re excited where we can go. We hope he can make up into a Stayers’ Hurdle candidate, I don’t think there was any fluke about his run at Aintree. He came there like he’d win jumping the last and just got out run after it by two very good horses.

“Thyme Hill is the horse to beat in that division now and we weren’t miles behind the winner.” 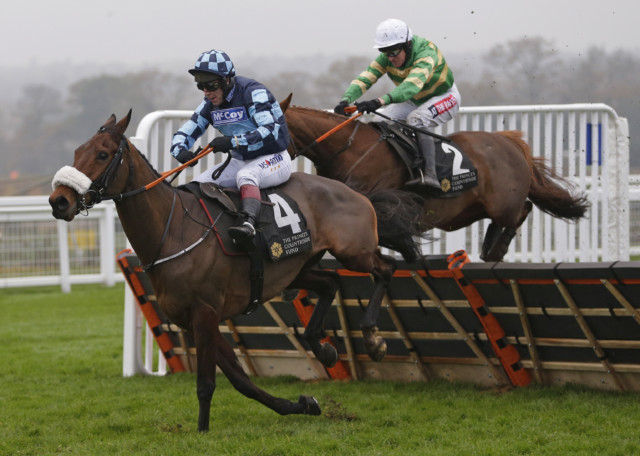 Thomas Darby will be tested over further this campaign

A progressive type that won three from five last year and would surely have been four, but not for a fall at Aintree. He could go novice chasing this year but could win a decent pot over hurdles first.

“He’s probably going under the radar a little bit, he progressed a lot last year. The original plan was to go for a Welsh Champion Hurdle with him and see where we go after that. So we’ll find something similar and the same applies.

“If he goes well there then you can step up into graded company and if we think it’s best he goes over a fence then so be it. He doesn’t want heavy ground so he’ll have a few runs and then as it gets soft we can give him a break. If he wins early on we’d have a good look at something like a Fighting Fifth.”

The best of the rest

“He’s not getting any younger but he’s a horse we love having around here and he’s still full of enthusiasm. We’ll start him off in a decent handicap over two and a half. He was unlucky not to win again last year after he won first time up. But he still retains a lot of ability for an older horse. He’s been a stable star and we’d love to get another good race in to him.”

“He’s a hard horse to train, he’s had issues with his knees and we’ll keep him over hurdles. There are a couple of two and a half mile handicaps we have in mind for him in November.”

“He’s been bought out of France and will run for Robert Waley-Cohen. He won well as a four-year-old but sadly isn’t a novice anymore. He’ll go to Newbury for a introductory hurdle at the Challow Meeting. He should make up into a very nice prospect.”

“He’s arrived from Jessica Harrington’s and will be aimed at the Grand National again. He’s obviously a nice horse to come in and he could run in the Becher Chase on the way.”

“He’s one we’ll try and win a nice handicap with. He won two novice hurdles and does everything very nicely.”

“He fell in the last when he looked like he might win the Lanzarote. He’s done very well over the summer and looks well. He should win a couple this year and he’ll go in a handicap chase in the coming weeks.”

“We think she could make up into a graded mare over fences this year and they have a great programme now for these types. She won three novice hurdles and looks a proper horse. She’s got a really big engine but might just start a bit later than most.”

Get Templegate’s horses to follow for the season ahead HERE

“He won well twice in the spring. He’s got plenty of ability and we’ve given him a wind-op. He’s a novice for the whole year which always helps and we like him, he’s a very sharp horse. “

“He’ll have one more run in a novice hurdle before stepping up in grade. He stays very well and loves heavy ground. We like him for the future and he probably won’t jump a fence this year, he always saves his best for the track which isn’t a bad thing.”

“A real sharp, speedy horse and won a couple of bumpers in decent style. He’ll start in a maiden hurdle and hopefully he’s one that can come through the ranks.”

“He’s a lovely horse but he’s going to want a trip. He’s very straightforward and one we’re hopeful about. He’s definitely a chaser for the future, a horse I like a lot.”

“Another young horse we like, and he’ll start in a maiden hurdle. He’ll want a bit further in time and handles some give in the ground well. He’s going to win plenty of races and he’d be one of my nicer novices.”

“We think he could be very smart. He bolted up first time and we wanted to run him in the Aintree bumper but he had a little blip. He’s more or less ready to go and we’ll start in a maiden hurdle in a couple of weeks.”

“I was amazed when he got beat in his bumper last year. He works very well at home and wants soft ground. He’s a proper staying type for the future.”

“He won his bumper easily at Huntingdon. He’s done very nicely over the winter and we’ll get him entered up in a maiden hurdle.”

“He won his only start in a bumper for Henry Daly and is with us now. He’s another for a maiden hurdle but he’s a massive horse and one for chasing down the line.”

“We’ve bought him from Sam Curling in Ireland where he wan well in a bumper. He’s by Califet and does everything nicely. He’s a stayer for the future.”

“She won a bumper that worked out very well at Uttoxeter. She could be a mare to look forward to in some decent races this season.”

“We were surprised she got beat in her bumpers but she jumps very well.”

“He’s a full brother to Ribble Valley and went very well in his debut bumper. He’s a horse that does everything very well and jumps great. He could go and play at a high level.”

“He ran very well in the Albert Bartlett and then we shouldn’t have run at Aintree, that came for him too quick. We’ll start him off in a beginners’ chase, he looks really well. He had a few issues this year so hopefully we can get a clean run this season. He could turn out into a real chaser, I think he could be my smartest one or he has the potential to be anyway.”

“He has to have good ground, he’s only just come back to me and he’ll probably jump a fence. He’s got plenty of ability.”

“He’s had a lot of issues and hasn’t quite built on that early promise but we know he’s got a big engine. He’s very well-handicapped off his home work and we’ll probably jump a fence at some point but we’ll start off in a handicap hurdle. We have high hopes for him but we need to get it to all click into place.”

“He came back over hurdles after a promising start over fences and we’ll go chasing again. We’ll start in a beginners chase and he’s got plenty of ability.”

“He needs soft ground and I think we’ll have another run over hurdles before we go novice chasing. He’s had a wind-op and his early form was very strong before it fell away a bit at the end of the season. I’d take him for the best of it rather than the latter as he’d had a busy enough year.”