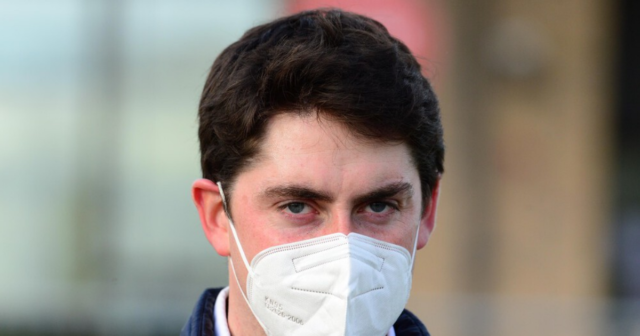 WINTER FOG is not to be mist in the Pertemps Final at Cheltenham.

After the weights were revealed for the handicaps last week, trainer Emmet Mullins let out a huge sigh of relief.

Mullins trains down the road from his uncle Willie Mullins

His eight-year-old Winter Fog was handed a mark of 138, meaning he’s guaranteed a run in the three mile handicap hurdle on March 17.

Shrewdie Mullins likes an old-fashioned plot job and the cat looks out the bag with this fella.

Mullins, nephew of the brilliant Willie Mullins, let slip that the Pertemps and not the County Hurdle would be his target. That was swiftly backed-up by a huge move for his horse in the betting.

Odds of 16-1 were quickly snapped up and he’s an eye-watering 5-1 with the likes of Betfair and Paddy Power now.

He runs in the colours of owner Paul Byrne, a son of a bookie who landed a massive touch with The Shunter in the Paddy Power Plate at last year’s Festival.

He was later bought by JP McManus and Byrne has not been shy in reinvesting that dosh.

Like The Shunter, Winter Fog was bought from another trainer; this time Daniel Murphy.

He’s only had the one run for Mullins, when he finished second in a Pertemps qualifier at Leopardstown in December.

He was well-punted at big odds that day and caught the eye of a few big punters in Ireland at the time.

Mullins and Byrne have been happy to keep their powder dry since and you don’t need to be a genius to know why.

Meanwhile State Man, trained by uncle Willie, has been all the rage in the County Hurdle – run on Gold Cup day.

He fell on his stable debut back in December but put that right when an easy winner at Limerick last month. It’s impossible to know how good he is.

He’s as short as 4-1 after the handicapper landed on a mark of 141. He needs a few to come out to get a run, but that looks a shoo-in.

By the looks of things the Brits could be watching this year’s Festival through their hands, too.

Ireland are only 6-4 to train 20 or more winners. Read it and weep.

SIR Michael Stoute has shut his second yard in Newmarket ahead of the new turf season.

The 76-year-old has seen his numbers drop in past seasons and might be getting ready for one last hurrah.

He still has the big owners on his side and has sprinter Dream Of Dreams in the yard. But word is he’s determined to find one more star to end his 50-year career at the top.

His cricket-mad pal Michael Holding recently moved back to the Caribbean and Stoute spends more and more time in his beloved Barbados these days.

Perhaps a 16th Classic winner to follow in the footsteps of the great Workforce and Shergar might be a fitting end to a stellar career.

AHOY SENOR got a big thumbs-up from Lucinda Russell after schooling at the weekend.

The Scottish trainer took her stable star to Kelso for a sighter at some fences and the novice was as sharp as a tack.

Russell had been tempted to save Ahoy Senor for Aintree but after a slick showing will head to the Brown Advisory and a rematch with Bravemansgame with a pep in their step.

JAMES DOYLE is taking a break from topping up his tan in the Middle East for one ride at Wolverhampton tonight.

He partners Sean Curran’s Ruby Red Empress in the 8.00 and he wouldn’t be hanging around if she didn’t have a big squeak.

Owned by former Swindon Chairman Lee Power, his band of merry men like a punt and she couldn’t have won any easier last time.

FORGOTTEN Cyrname made his first steps to a spring time return last week.

Paul Nicholls took him for a racecourse gallop with Politologue at Wincanton and is eyeing up a make or break run at the end of April.

Aintree might come too soon for the one-time top-rated horse in Ireland.

She showed stablemate Mullenbeg a clean pair of heels on the gallops last week and the Harris team have told everyone in the village to get on at big odds.

She’s still 33-1 for the race, and gets a whopping 17lbs weight allowance.