Over £800,000 earnings, 102 winners and ‘no crap’ – how Donald McCain became the brightest Northern light this season
Advertisement 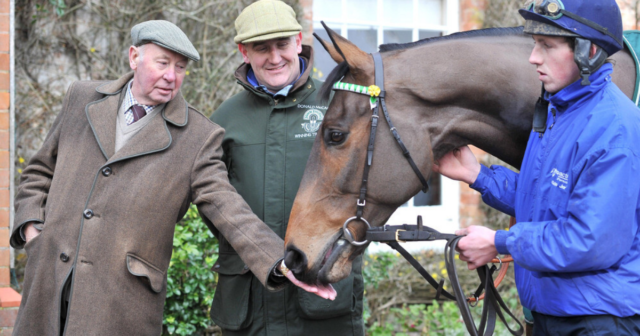 The 51-year-old, son of Red Rum’s great handler ‘Ginger’, was the first to raise his bat as he passed the 100 winner mark for the season last week.

From his base in Cholmondeley, Cheshire, McCain and his team continue to fly the flag for his beloved region.

A modest McCain told me: “We’re not getting above ourselves, we know where we are in the pecking order and stuff like that – but it shows the work going in is worth it.”

Once upon a time, the north was the place to train jumps horses and legends like his old man, Gordon Richards, Michael Dickinson and Peter Easterby ruled the roost.

But nowadays McCain is the only northern trainer in the top 20 of the current standings, with Lucinda Russell in the mix for Scotland.

With plenty of yards outside the big training centres in the south struggling to attract major owners, McCain is bucking the trend. Over £800,000 in prize money and 102 winners makes for pretty reading, with three months of the season still to run.

McCain’s previous best tally in recent years was just 66, but he insists there’s been no magic wand waved.

Straight talking McCain laughed: “I’ve got great staff, a good team of owners, nice young horses and a good gallop and that’s that.

“I can make it sound a lot more scientific if you want, but that’s what it’s about to be honest.

“I can fill you with all kinds of crap like some people do, but it’s a fairly straightforward way of doing the job and you’ve got to be supported by the right people.”

If McCain can do it, why can’t others in the region? He blames the current fixture list and an obsession with all things Cheltenham for the demise.

He explained: “There are a lot of good trainers in the north of England, a lot of them are better than their southern counterparts.

“One problem is we’re not supported by the racecourses. Take the prize money at the Scottish National meeting this year, they should be ashamed of themselves, they really should.

“Things like that put people off having horses in the north. There are Grade 1 tracks in the north that don’t produce the type of racing that would encourage people to have horses based with people like me up here.

“The trainers aren’t the problem, there are brilliant trainers up here. It’s your everyday racing at Newcastle, Wetherby and Ayr. They aren’t putting on the racing you would be at the big southern tracks. They are Grade 1 tracks, and they should be.”

A decade ago, McCain trained 150 winners as top-notchers Cinders And Ashes, Peddlers Cross and Ballabriggs starred at Cheltenham and Aintree.

With momentum building again and a team of young horses, it’s not a stretch to say McCain might enjoy a repeat of those heady days in the not so distant future.

The trainer is quick to praise his team at Bankhouse Stables for his success, none more so than his stable jockey Brian Hughes.

Hughes has already all but sewn up his second jockeys’ championship with over 140 winners, nearly DOUBLE second-placed Sam Twiston-Davies.

McCain said: “It’s massively underplayed what Brian is doing. His numbers at the moment have not been done by anyone bar AP McCoy. It’s huge what he’s doing.

“He gets a bit of stick for not riding at the big meetings. But it’s not for any other reason than simply he works for me, that’s his job.

Brian Hughes has ridden 141 winners so far this campaign

“He’s a northern jockey. If the right horses are there to go down, then we’ll go. If not then we’ll go and do our job elsewhere. If he had five good rides down south, he’d be down there in a shot.

“I think that’s cited as why it’s not talked about so much, but that’s rubbish – we’re just doing our jobs.”

Young, improving horses like Minella Drama, A Different Kind and Richmond Lake could all be seen in big races this spring. But it’s likely to be at Aintree and not the Cheltenham Festival.

McCain added: “Some people are brainwashed by Cheltenham and I think quite often you can go elsewhere for better prize money in weaker races.

“We’re a northern yard, I have mostly northern owners and we get a lot of stick for not having Cheltenham runners, let alone winners.

“But we’re a northern outfit, my owners want to go to Aintree – it’s pure and simple. It’s a better atmosphere, it’s often better prize money and it’s a better experience.

“A lot of us have grown up around Aintree and the first port of call will always be ‘what can we get to Aintree?’.”