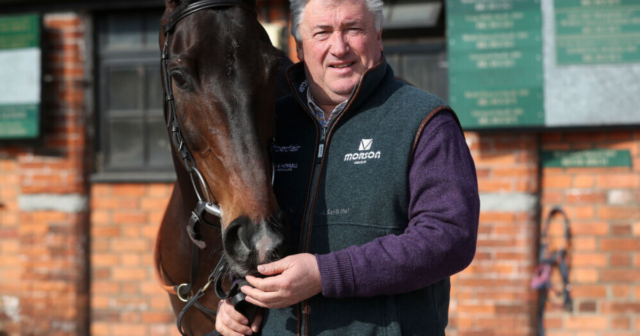 REIGNING champion trainer Paul Nicholls is a red-hot favourite to defend his title this season.

An already deep squad has been further strengthened over the summer with several new arrivals.

Nicholls sent out a personal best 176 winners last term and has made a fast start in his bid to surpass that.

He has 150 horses in training and gave us the latest on his stable stars.

We will start him off in the Grade 1 chase at Down Royal early next month.

That will give us plenty of time to get him in perfect shape for Kempton, where he will try to win back-to-back King George’s on Boxing Day.

He could then go over to Leopardstown during the Dublin Racing Festival – but I’m not sure about running him in the Gold Cup again.

He wasn’t at his best in the King George last year but was brilliant at Aintree and then gave us all an amazing day when winning the Punchestown Gold Cup.

After the Irish domination at Cheltenham it was very satisfying to go and win their big one at Punchestown.

I’m keeping him fresh for the King George this time and he will then go to Newbury before Aintree and Punchestown.

He will be an 11-year-old in a couple of months but he is still showing all his old enthusiasm.

The Tingle Creek, a race he has won twice, looks like it will be a little stronger this year.

So we may run him in the Shloer at Cheltenham in November, then in the Desert Orchid at Kempton and then get him fresh for the Champion Chase.

He’s had a wind operation and will go straight to the Charlie Hall, which he won impressively last year.

I doubt he will have an entry in the King George as I think we have worked out that it doesn’t really suit him.

I wouldn’t be afraid to enter him in the Gold Cup if he wins the Charlie Hall again – but that is a long way off yet.

What an improved horse he is – he is rated 168 now and was a 130 horse when he first went chasing.

He won the Haldon Gold Cup last year and he will start off there again next month.

He will have to carry a big weight but it’s the perfect starting point if we want to get a run in before the Tingle Creek.

The plan was always to go chasing this season and he made a very nice start over fences at Newton Abbot.

He jumped great around there and beat some older horses with chasing experience pretty handily.

The plan is to run in the Rising Stars at Wincanton next month before the Kauto Star on Boxing Day.

He was a top-class juvenile last year, but it can sometimes be difficult for these young hurdles in their five-year-old season.

He will start off in the Fighting Fifth at Newcastle and we can see where we stand after that.

He is bred to be a staying chaser so I’m not sure he is a Champion Hurdle horse – but he could prove me wrong.

Bravemansgame made a winning chasing debut at Newton Abbot

He is a month behind the others after a little setback but he is going to go back over fences this year.

We tried him over them two years ago and he lacked confidence but he has schooled well this year.

He will start off in a Grade 2 at Newbury next month – I’m going to try and keep him and Bravemansgame apart.

Knappers Hill won a bumper at Aintree last year and we think he could be a very exciting novice hurdler.