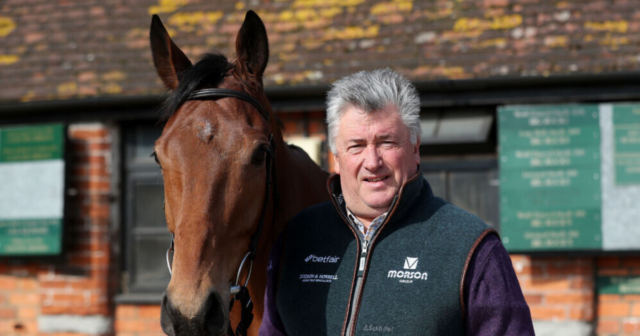 PAUL NICHOLLS is set to let his stars do the talking on the track.

The 12-time champion trainer reckons the quiet form of his yard has been ‘blown out of proportion’.

And, after blood testing the likes of big guns Bravemansgame and Clan Des Obeaux, Nicholls is more than happy for them to strut their stuff at Newbury on Saturday.

Nicholls has had just one winner from his last 39 runners.

And, in the wake of Frodon and Greaneteen’s poor efforts in Ireland, the trainer was worried enough to send the stable feed to be tested earlier this week.

However he told me: “There’s no panic.”

His Newbury team will be the first runners the Ditcheat stable has sent out all week.

Nicholls, 59, said: “Look, I think it’s all been blown out of proportion to be really honest. The horses we’ll run at Newbury this Saturday have all been blood tested and there’s nothing wrong with them.

“It’s not going to last, I know that.

“We’ve been through it before and the second we have a few winners it’ll all be forgotten.

“January is never a big month for us, and then I know we were meant to have a handful of runners at a couple of meetings this week but there’s nothing to that.

“My team have told me they’re happy with their horses and not one horse doesn’t look right – they’re not coughing, we’ve not got runny noses about the place.

“We were going at a 29 per cent strike-rate before Christmas so we were never going to be able to keep that up.”

Clan Des Obeaux will run in the Denman Chase with Bravemansgame in handicap company for the first time.

Nicholls said: “It’s a big weekend for them. Clan Des Obeaux will go in the Denman Chase, he should have won it last year and the ground will be perfect.

Clan Des Obeaux could run at Kempton, Aintree and Punchestown if all goes well at Newbury

“We didn’t run Bravemansgame for a while before last Cheltenham – and I’m not making any excuses, the result would have been the same – but he’s a better, bigger, stronger horse this year and a run will do him good.

“Hitman was never going to take Shishkin and Energumene on at Ascot and that probably paid off. Now the Game Spirit looks a good spot.

“Knappers Hill will go in the Betfair Hurdle. Novices have a good record as everyone knows and we’ve had this on our mind for a while.”