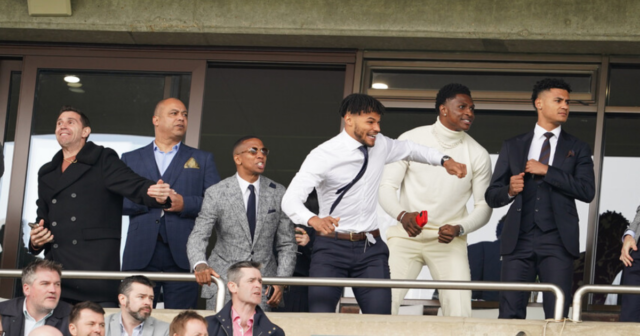 Coutinho, currently on-loan at Aston Villa from Barcelona, is a part owner of Olivia Maralda, a two-year-old filly.

Coutinho, far left, enjoyed a day out at Cheltenham Festival with his Villa team-mates in March

Trained by Michael O’Callaghan, she has been entered in the six-furlong Group Three Coolmore Stud Fillies’ Sprint Stakes with eyes on a possible run at Royal Ascot next month.

O’Callaghan was full of praise for Olivia Maralda – one of 12 horses entered in the race worth just under £35,000 to the winner – and reckons she can justify her massive price tag.

He said: “She cost plenty of money but I think she’s a decent filly. The soccer player, Philippe Coutinho, owns half of her. They’re trying to get the registration sorted in time so his name appears on the racecard.

“We’ll see how she works during the week but I wouldn’t be concerned about pitching her in at Group Three level on debut.

“I think she’s going to end up at that level on her second start anyway, so I wouldn’t be worried at all.

“If everything goes to plan, we would be looking at bringing her to Royal Ascot for the Albany.”

Olivia Miralda races for AMO Racing, which was founded by Joorabchian.

The Iranian represents both Coutinho and his compatriot Willian, as well as Tottenham’s Sergio Reguilon.

Joorabchian was also involved in the transfers of Carlos Tevez and Javier Mascherano to West Ham in 2006.

Coutinho is not a novice to horse racing. He was spotted attending day one of the Cheltenham Festival with Villa teammates Ollie Watkins, Emiliano Martinez and Tyrone Mings back in March.

Coutinho has impressed since he returned to the Premier League, where he linked up with former team-mate Steven Gerrard, who is his boss this time around.

Villa are expected to make his move permanent for around £17.1m, despite interest from Newcastle.