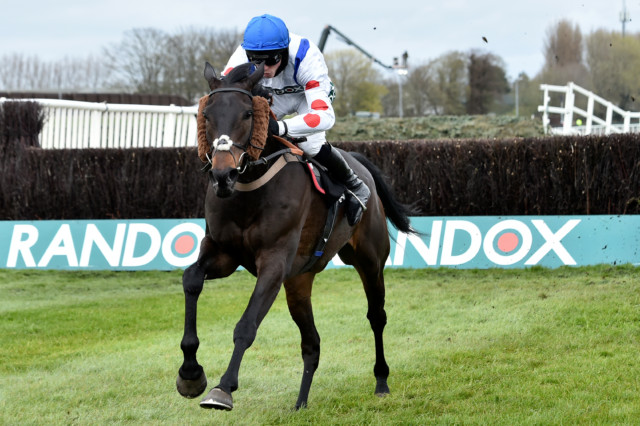 The Willie Mullins nine-year-old saw off favourite Al Boum Photo – and it means Fergie has collected almost £300,000 in winnings over the past month.

FIVE HELMETS was impressive when winning by five lengths on his handicap debut at Navan. He tanked along and looks an improver. Rock Chica went close in a hot race at Fairyhouse last time. She has gone up just 1lb for that and the first-time tongue tie should help. At a price, the handicapper is giving Golden Spear a chance and there was some promise at Fairyhouse on his last run. Stablemate Golf Marin has more to offer after a solid effort at Navan last month and has gone well here a couple of times.

JUNGLE JUNCTION caught the eye when winning nicely on his handicap chase debut at Fairyhouse earlier this month. He powered away from his rivals and showed lots of pace for this trip. JP McManus has a strong team of which Unexcepted could be the most interesting. He’s dropping down from a Grade 1 and this shorter trip should help too. Sully D’Oc AA went close in the prestigious Red Rum Chase at Aintree and has to be respected too with a good claimer taking off a valuable 3lb. Epson Du Houx was third behind the tip last time and has place claims again.

SOME NECK was no match for Tiger Roll at Cheltenham but was a solid third in the Cross-Country Chase and ran well the last time he tackled this course. He stays well and should be right there again. It’s interesting that Jamie Codd rides Alpha Des Obeaux and he was fourth at the Festival before getting round in the Grand National. He’s not won for a long time but his class makes him a danger. Stand Up And Fight looks the pick of the Enda Bolger pair. He was beaten a neck at Fairyhouse and has winning form around here. Space Cadet ran well in the Ulster National last time and is another for the shortlist.

FLOORING PORTER looked something special when winning the Cheltenham version of this race from the front. He galloped them into the ground and this six-year-old can carry on improving. Beacon Edge ran well in fourth there when not powering up the famous hill. It was still a good effort and he can hit the frame. Klassical Dream is a massive price judged on his best form which saw him win this race in 2019. He’s been off almost 500 days but Willie Mullins will have him fit enough to run well. The Storyteller prefers this track to Cheltenham and is another each-way hope.

CAPODANNO was less than two lengths away in good company at Fairyhouse and might have won with a better jump at the last. He looks on a fair mark and can go close again. Floueur ran a cracker when third in the Martin Pipe at the Festival and should relish this step up in trip. He’s a danger. Unowhatimeanharry has won the Stayers’ Hurdle here twice and he has his sights lowered. He’s on the wane at 13 but his quality can see him beat plenty of these. Lynwood Gold is consistent and can go well again.

ENERGUMENE looks on a different level to these and can extend Willie Mullins’ winning streak in this race to six. He stepped up into Grade 1 level to win the Leopardstown Arkle by ten lengths before a niggle kept him out of Cheltenham. Provided he’s over that he should win this well. Captain Guinness has winning form over this trip and track. He was too keen in the Cheltenham Arkle and did well to finish third. He can chase the tip home ahead of Janidil who jumped much better when winning at Fairyhouse earlier this month. Dropping back to this minimum trip may not be ideal though.

GAULOISE was beaten in a tight finish for a Fairyhouse Grade 1 last time. She showed lots of pace there and should be fine with this drop in distance. Magic Daze improved a bundle to finish second in the Dawn Run at the Cheltenham Festival last time. That was just her third start and she couldn’t quite get up the hill. She can improve here. Bigbadandbeautiful made her belated hurdles debut at Navan last time and won cosily. This is much tougher but she can progress. Hook Up made a couple of costly errors at Fairyhouse but can’t be dismissed for a place at least.

GRAND JURY was impressive when striking on debut here last time by almost five lengths. He quickened well and should have more to come. Dysart Dynamo was an easy winner first time out at Clonmel and has an obvious chance for Willie Mullins. Glen Wyllin is a big price but showed promise when scoring at Ballinrobe 13 days ago. He ran right through the line and can hit the frame in this stronger company.