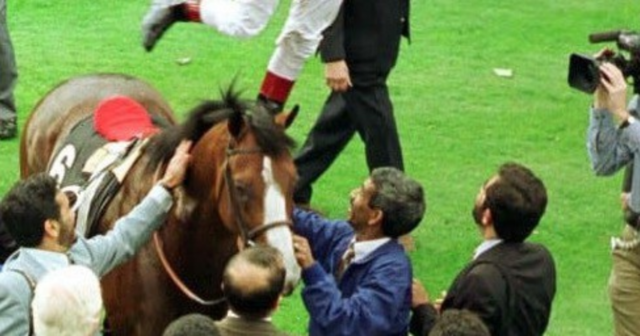 A PUNTER who staked all he had on Frankie Dettori riding seven winners at Ascot marked the 25th anniversary of the jockey’s unique feat — as a multi-millionaire.

Frankie Dettori’s wins helped Darren Yates build a property and development empire he sold for £20millionDarren and wife Annaley with Frankie Dettori after their 1996 triumph that saw them win more than £550,000

Yesterday, Darren recalled his life-changing wager with William Hill on September 29, 1996. He told how he had been denied a £700 overdraft just 24 hours earlier and had a bust-up with employees over their missed wages.

Of the fateful day, he said: “I’d been playing football for my local team in Morecambe and only caught the racing results over a post-game pint.

“I asked how it was going and they said Dettori had four out of four. I reckoned I’d won £700.

“Then Frankie’s fifth and sixth horses went in and I thought I was heading for the £24,000 mark.

“So I went down to the betting shop to watch the seventh race and just quietly sat there.

Darren said: “I went home and just burst out crying. I told my wife Annaley, ‘I’ve done it, darling. We’ve hit the big one’.

“She started crying. We sat there hugging each other for about an hour and we just couldn’t stop crying. That was the best moment of my life — knowing all our ­worries were over.”

He and Annaley, 54, moved from their cramped home into a mansion in the resort of Lytham St Annes, Lancashire.

Darren also bought a couple of horses for £10,000 each — and a series of three-bed semis for £20,000 to start a business he sold just before the pandemic.

He continued to bet but in larger sums and won hundreds of thousands before realising his dream with a runner in the Grand ­National in April. Blaklion, a 50/1 shot, came in sixth.